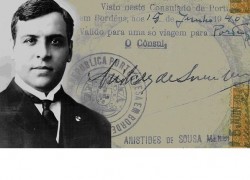 A group of survivors of World War II, saved by Aristides de Sousa Mendes, the Consul of Portugal in Bordeaux, France, during the War, will meet Thursday, June 20, at the house that belonged to the diplomat, in Cabanas de Viriato, Carregal do Sal, mainland Portugal.

The group, accompanied by family members, will start a five-day visit to various sites related to the life of Sousa Mendes and the lives of Jewish refugees in Portugal during the War.

American architect, Eric Moed, the grandson of a former refugee, has prepared a special art installation at the site inspired by the events being celebrated.

The journey started last week, in France, aiming to honor the memory of Aristides de Sousa Mendes (1885-1954) who, in June of 1940, issued Portuguese visas of safe conduct to over 30,000 at-risk refugees, including an estimated 10,000 Jews.

Helped by his wife and children, Sousa Mendes issued visas without regard to nationality or religion. The operation has been described by the Holocaust scholar Yehuda Bauer as “perhaps the largest rescue action by a single individual during the Holocaust.”

He issued the visas against the Portuguese government orders for which he was recalled and subjected to disciplinary action. A lawyer by training, after being dismissed from is diplomatic post, he was disbarred by Salazar, Portugal’s Dictator. A father of 14 children, in 1954, Sousa Mendes died destitute and in obscurity.

In 1966, Sousa Mendes was named “Righteous Among the Nations” by the State of Israel. In 1986, the U.S. Congress proclaimed him a hero. Later, former Portuguese President Mário Soares, in the name of the Portuguese Nation,  apologized to the Sousa Mendes family. The Portuguese Parliament recognized him posthumously with the rank of Ambassador.