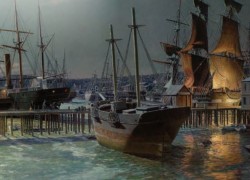 The Museum of Pico Island is hosting the itinerant exhibition “Yankee Whalers! The Shared Legacies of Luso and Yankee Whalers” in partnership with New Bedford Whaling Museum and the Azores Sea Observatory. The exhibition is open until October 30.

The traveling exhibition celebrates the interwoven Luso-American stories of the Azorean, Cape Verdean, and Brazilian communities to the United States from early immigration in the 18th century through the latter half of the 20th century. It explains how the Lusophone (Portuguese speaking) migration is integral to the American story.

The U.S. Census data suggests that 3 million people in the U.S. self-identify with Portuguese, Cape Verdean or Brazilian ancestry. These distinct cultures are linked historically through heritage, language, and the pursuit of opportunity afforded by the international network of Yankee whaling, with the Port of New Bedford as the major gateway to the American Dream.

The New Bedford Whaling Museum is home to the Azorean Whaleman Gallery the only permanent exhibition space in the United States that honors the Portuguese people and their significant contributions to the United States maritime heritage.