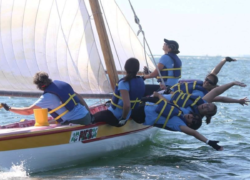 The 11th edition of the International Regatta of Whaling Boats competition, between teams from the Azores and New Bedford, took place off the coast off Faial and Pico, last weekend, with a total of 80 male and female participants.

The women’s and men’s teams from Pico became champions in rowing, with the teams from Faial in second, and the United States in third place.

At the closing and award ceremony, which took place in the parish of Calheta de Nesquim, in the municipality of Lajes do Pico, the Mayor of Horta, Carlos Ferreira, stressed that this Regatta “not only maintains but also reinforces the close relations between the Region and the community of Azorean emigrants from New Bedford, in the United States of America, disseminating and promoting the tradition of whaling culture.”

In 2023, the XII International Regatta will take place in New Bedford, on the east coast of the United States, hosted by Maritime Heritage Society (AMHS).

The International Azorean Whaleboat Regatta was first held in New Bedford in 2004. Since then, the competition was held every other year, alternating between New Bedford and the Azores. There are only 63 Azorean remaining whaleboats in the world. The Maritime Heritage Society (AMHS) houses three of them – the last ones remaining in the United States.