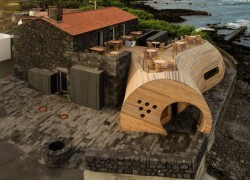 The Cella Bar & Restaurant, built in the Madalena town of Pico island, is the winner of the 2016 ArchDaily Building of the Year Award for the Hospitality Architecture Category.

Built in 2015, over the remains of an old abandoned wine warehouse, the Cella Bar & Retaurant is the creation of architect Paulo Lobo, a FCC Arquitetura associate. “The building is the result of a regenerative transformation and expansion of a small pre-existing structure that had been abandoned for many years” according to its creator.

The prestigious international ArchDaily Building of the Year Awards are a result of two weeks of peer-based nominations and online voting representing  55,000 voters and over 3,000 projects featured on ArchDaily during the past year.

Established in 2008, ArchDaily.com, is one of the most visited architecture websites worldwide as a source of continuous information for a growing community of thousands of architects. Its mission is to improve the quality of urban life by providing inspiration, knowledge and tools to the architects. Each year, ArchDaily.com organizes the ‘Building of the Year Awards’ whose winners are chosen by a vote of the 60,000 architects who are members of the site.