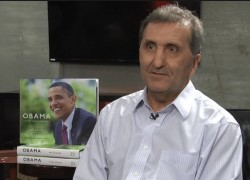 At the invitation of the Government of the Azores, the former White House photographer, Pete Souza, visits the Azores from April 22 to 28 to present his two latest books Obama: An Intimate Portrait (2017) and Shade: and  A Tale of Two Presidents (2018).

A native of New Bedford (MA), Pete Souza (born December 31, 1954) has roots on São Miguel island from where both sets of grandparents emigrated to the United States.

The public presentations are scheduled to take place on April 23, at the Arquipélago – Centro de Artes Contemporâneas, on São Miguel; on April 25, at the Museu dos Baleeiros, Pico; and on April 27, at the Public Library and Regional Archive Luís da Silva Ribeiro, on Terceira.

Pete Souza, who in November 18, 2016, stopped in the Azores with President Barack Obama, spoke of in his relationship with the former president:

“For eight years, the President has called me the Azorean. Both sets of my grandparents were born in the Azores. So when he heard that we were refueling at Lajes Air Base on the Azorean island of Terceira, he said he was disembarking just so he could take a picture with me in the Azores. But a quick picture turned into a 90-minute walk around the base including this scene on the edge of the runway. This may not be one of the best photographs of the year, but I took some personal license to include it.”

Besides Obama: An Intimate Portrait (2017) and Shade: A Tale of Two Presidents (2018), Pete Sousa is the author of five additional books, Unguarded Moments: Behind-the-scenes Photographs of President Reagan (1997); Plebe summer at the U.S. Naval Academy (2003); Images of Greatness: An Intimate Look at the Presidency of Ronald Reagan (2004) and The Rise of Barack Obama(2009).