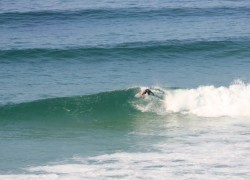 The city of Peniche, mainland Portugal, is hosting the Rip Curl Pro Portugal for the 2011 WCT – World Championship Tour for surfing. The event will take place October 15-24 at various local beaches.

The Rip Curl Pro Portugal will culminate the Dream Tour’s European leg (Stop No. 9 of 11) with the participation of 36 of the world’s best surfers.

José Farinha, organizer of  Rip Curl Portugal, told LUSA news that the budget for the completion had been estimated at 1,6million-euro but the event was projected to generate a return of 10 million-euro. He said 120.000 people were expected to attend.

Peniche, home to one of Europe’s most consistent surf beaches, is recognized internationally as one of the world best for surfing. The local beaches attract thousands of visitors every year, seeking for a perfect dream waves and long barrel rides. It has beaches and breaks facing in 3 distinctly different directions making it a very variable and consistent destination for surfers. Home to many surf camps/schools, Peniche is the destination for the WCT of the ASP (World championship tour of Association of surfing professionals.

The Rip Curl Pro Portugal will webcast LIVE via http://live.ripcurl.com/index.php?portugal2011