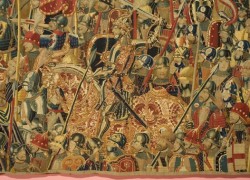 The Peabody Essex Museum (PEM), of Massachusetts, is hosting an exhibition of 15th century Portuguese tapestries titled, The Invention of Glory: Afonso V and the Pastrana Tapestries, on view from October 27 to December 31, 2012.

Monumental in scale and meticulous in construction, the Pastrana Tapestries are among the finest surviving Gothic textiles in existence. Each measuring nearly 36-feet-long, these renowned Belgian tapestries will soon be on view at the Peabody Essex Museum (PEM) as part of a rare North American exhibition tour.

Organized by the National Gallery of Art, Washington, and the Fundación Carlos de Amberes, Madrid, The Invention of Glory: Afonso V and the Pastrana Tapestries unfurls a vibrant tableau of Portugal’s 15th-century military victories woven in glorious hues of wool and silk. The four tapestries were recently restored to their finest condition in centuries, and will be presented at PEM as an immersive, two-gallery experience before returning to Spain.

“PEM is honored to present this astonishing group of tapestries. The complex narrative program, vibrant colors, and artistic accomplishment of these works make for a dramatic and fascinating gallery experience” said Karina Corrigan, coordinating curator and PEM’s H.A. Crosby Forbes Curator of Asian Export Art. “Viewing the Pastrana Tapestries is a singular event, and the presentation here at PEM will be the final opportunity for the U.S. public to see these exquisite works of art.”

Expertly woven in Belgium’s Tournai workshops in the late 1400s, the Pastrana Tapestries are highly unusual in their depiction of a contemporary subject: the military victories of Portugal’s King Afonso V (1432-1481) in North Africa. Through vibrantly colored wool and silk threads, a complex scene of military pomp and conquest emerges — knights in full regalia raise their swords to the sky, royal trumpeters sound their advance, ship masts punctuate the horizon and scenes of battle teem with valor and might. The tapestries are the most important surviving representation of 15th century armor, weapons, and artillery in any art form.

Commissioned by King Afonso V to celebrate his overseas conquests, the Pastrana Tapestries represent the height of artistic accomplishment in the 15th century. Textures of stone, metal, skin, and cloth are rendered with a vibrating realism that conveys weight, movement, and subtleties of light and shadow. Detailed facial expressions reveal individuality amongst the hundreds of figures depicted.

The Conquer of Asilah and Tangier

Seeking to extend Portugal’s military and commercial influence in North Africa and to expand the Catholic Church’s realm, King Afonso V led his troops to battle in 1471, conquering the Moroccan cities of Asilah and Tangier, strategically located near the entrance to the Strait of Gibraltar.

The deadly and protracted battle of Asilah is detailed in three panels, tracing the military progress of landing, assault, and siege. The scenes of war are multilayered and intensely compressed. King Afonso V is featured prominently in armor atop a fantastically decorated horse while the scenes of battle swirl densely around him. Military banners woven throughout the tapestries create a unified visual rhythm and echo the great movement and energy of the scene.

Having learned of the crushing defeat of Asilah — over 2,000 dead and 5,000 captured — the residents of Tangier surrendered to the Portuguese rather than suffer the same fate as their neighbors in Asilah.. The stone walls of the city and the choppy waters surrounding Tangier dominate the fourth tapestry. Retreating residents are depicted stoically leaving the city with bundled belongings on their backs and children in tow.

Exibit Credits: The exhibition is organized by the National Gallery of Art, Washington, D.C., and the Fundación Carlos de Amberes, Madrid, in association with the Embassy of Spain, the Spain-USA Foundation and the Embassy of Portugal, and with the cooperation of the Embassy of Belgium and the Embassy of Morocco in Washington, D.C., as well as the Diocese of Sigüenza-Guadalajara and Church of Our Lady of the Assumption, Pastrana, Spain. Support provided by the East India Marine Associates of the Peabody Essex Museum.
The conservation of the tapestries was undertaken at the initiative of the Fundación Carlos de Amberes, with support from the Belgian Inbev-Baillet Latour Fund, the Spanish Fundación Caja Madrid, the Region of Castilla-La Mancha, the Provinc -Guadalajara / Church of Our Lady of the Assumption.  Promotional Partner: Landry & Arcari Oriental Rugs

About the Peabody Essex Museum: The Peabody Essex Museum presents art and culture from New England and around the world. The museum’s collections are among the finest of their kind, showcasing an unrivaled spectrum of American art and architecture (including four National Historic Landmark buildings) and outstanding Asian, Asian Export, Native American, African, Oceanic, Maritime and Photography collections. In addition to its vast collections, the museum offers a vibrant schedule of changing exhibitions and a hands-on education center. The museum campus features numerous parks, period gardens and 22 historic properties, including Yin Yu Tang, a 200 –year old house that is the only example of Chinese domestic architecture on display in the United States.