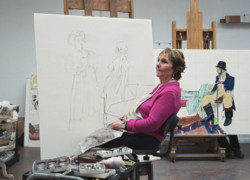 Portuguese painter Paula Rego, 84, has been honored in London with the ‘Lifetime Achievement Award’ by Harper’s Bazaar, one of the world’s most influential fashion magazines.

The award honors women who stand out in various fields, from acting to music, painting or writing.  According to the juri, Paula Rego received the Lifetime Achievement Award, “For seven decades, the artist has been staging a silent revolution through the visceral power of her subversive paintings.” 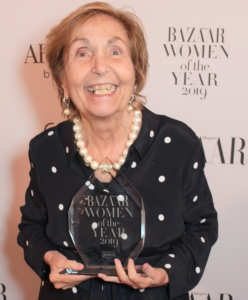 This year’s honorees include actress Cate Blanchet (Philanthropy Award), painter Celia Paul (Artist of the Year), actress Helena Bonham Carter (British Icon), writer Jeanette Winterson (Writer of the Year) and singer Jorja Smith (Singer of the Year). The awardees are being featured in the December issue of Harper’s Bazaar.

Since the 1960s, Paula Rego has lived most of her adult life in London, UK, where she acquired dual Portuguese and British nationality.

In 2010, she was awarded the degree of Dame Commander of The Order of the British Empire, by Queen Isabel II, for her contribution to the arts and in 2016 she was honored with the Lisbon City Medal of Honor. In 2029, Paula Rego was distinguished in London with the Medal of Cultural Merit by former Portuguese Minister of Culture, Graça Fonseca, who acknowledged a “lack of recognition” by the Portuguese Government. 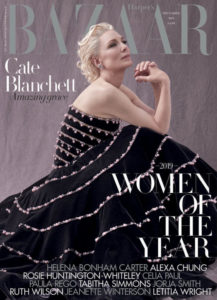 The painter’s work was recently the subject of a retrospective “Paula Rego: Obedience and Challenge” in Milton Keynes, north London, which covers her work from the 1960s to 2011, with over 80 pieces, including drawings, collages and paintings. The exhibition  also included the Scottish National Gallery, in Edinburgh, Scotland, and the Irish Museum of Modern Art in Dublin, Ireland. The works focus mainly on political and social criticism.

On October 24, the Serralves Foundation of Portugal inaugurated the exhibition “Paula Rego: The Cry of Imagination” displaying works by the painter created between 1975 and 2004.

The ‘Casa das Histórias Paula Rego‘ (Paula Rego Museum) in Cascais, Portugal, is dedicated to paintings, drawings and graphic work by the UK-based Portuguese artist. The beautiful building was designed by Pritzker Prize-winning architect Eduardo Souto Moura. A substantial part of the collection at the Casa das Histórias was donated by Paula Rego herself and includes her complete etchings, 257 in total, as well as a set of 273 drawings.

The gallery also hosts frequent exhibitions of Rego’s art including art from her 18-month residency at a basement studio in the National Gallery in London. Works from this period include Study for Crivelli’s Garden (1990), The Artist in her Studio (1993) and Time – Past and Present (1990).

Overall the collection covers 50 years of Paula Rego’s work and includes paintings, drawings and etchings using a variety of techniques. There are also paintings on display by Rego’s late husband, the artist Victor Willing (1928-1988).