World renowned painter, Paula Rego, one of the most internationally  acclaimed and awarded Portuguese artists, died this Wednesday morning in London, aged 87.

Born in 1935 in Lisbon, into an affluent family, Paula Rego was sent to a British finishing school and studied at the London’s prestigious Slade School of Fine Art.

Later she acquired dual nationality, establishing herself in the United Kingdom as a Portuguese-British citizen and an artist.

While she was considered Britain’s most revered artist, and a key member of the London Group movement, in Portugal she was considered the country’s most famous contemporary artist with a museum – Casa das Histórias – dedicated (2009) to her work in the town of Cascais.

In the United Kingdom, Paula Rego’s  work is in the collections of the British Museum and the National Gallery. In the United States her art is part of the collections the Metropolitan Museum of Art in New York, the Art Institute of Chicago and the Yale Center for British Art.

Prime Minister António Costa decreed a day of national mourning in the artist’s honor, to be announced when the date of the artist’s funeral will be scheduled.

“Her paintings, drawings and engravings contain powerful images that will stay with us and with generations to come,” the government said in a statement. It added that Rego “was an artist who was acutely alive to the reality of our society.”

Portuguese President Marcelo Rebelo de Sousa, who visited the artist’s London studio in 2016, said Paula Rego was the country’s greatest modern artist of the past three decades, as he recalled his visit and “witnessed the enchanting and disturbing power” of her work. 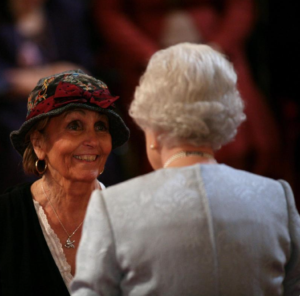 In 2010, Queen Elizabeth II made Paula Rego a “Dame of the British Empire” for services to the Arts, the female equivalent of a knight.  In 2004, she was awarded the prestigious Grã-Cruz da Ordem de Sant’Iago da Espada Jorge Sampaio the President of Portugal.

One of the most notable figurative artists of her generation, over a career spanning more than five decades, she created magical paintings, pastel, prints, and sculptural installations, inspired for the most part by the culture of her native Portugal.

Remarkable for depicting women who are both strong and vulnerable, psychologically charged with sexual violent undertones, her magical pictures were also inspired by her life experiences, childhood memories and fairytales.

In an interview with London based The Art Newspaper (2019), Paula Rego was asked what art is for. She responded: “Human beings have always felt the need to create and to leave their mark; even on cave walls they did it. Great art reveals something about us. It’s the best we can do.”

Paula Rego was married for 29 years to British artist Victor Willing, who died in 1988. She is survived by their children Nick, Caroline and Victoria, and by several grandchildren and great-grandchildren.

“Art is the only place you can do what you like. That’s freedom.”

“Every change is a form of liberation. My mother used to say a change is always good even if it’s for the worse.”

“Sketches always have more vitality than paintings because you’re finding things out through doing them.”

“If you put frightening things into a picture, then they can’t harm you. In fact, you end becoming quite fond of them.”

“I’m not fashionable at all, and the fact that I manage to sell pictures without being fashionable is thanks to my gallery.”

“I’ve needed an impulse from within, a lot of emotional energy to do this stuff, and a kind of desire. It’s a very aggressive thing. It’s not an aggression like you’re hitting it; it’s a sensual aggression, if you like.”

“I get inspiration from things that have nothing to do with painting: caricature, items from newspapers, sights in the street, proverbs, nursery-rhymes, children’s games and songs, nightmares, desires, terrors. … That question [why do you paint?] has been put to me before and my answer was, ‘To give terror a face.’ But it’s more than that. I paint because I can’t help it.”