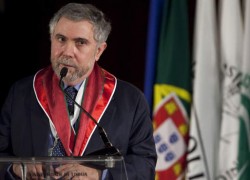 In a joint ceremony held at the Aula Magna of the University of Lisbon, Krugman spoke of the merits of Keynesian economics versus economic orthodoxy and the risks of ignoring the lessons of the economic history of the 1930’s.

From his perspective, the current crisis in the Eurozone is mostly of its own making, and Germany’s austerity orthodoxy is the wrong solution to the wrong problem.

About Portugal’s economic situation, at a press conference is Lisbon yesterday he said that the odds are 75 percent for Portugal to keep the euro as the country’s currency.  “No one can tell” how the European financial crisis will evolve, Krugman said. Whether Portugal stays in or not “depends on what happens over the next two or three years,” he added.

Answering questions on Portuguese pay levels, Krugman said Portugal would inevitably have to lower its salaries in comparison with the main euro zone countries “but not to Chinese levels,” he replied. He also said that the Portuguese have not yet felt the full effect of the economic measures on their way of life.

“Growth is going to be slow for a while and it is not going to come back immediately. A fair part of the negative impact of the additional measures is yet to be felt,” he said.

About the austerity measures being forced on Portugal by its European partners, Krugman told journalists that the Portuguese government should resist more austerity.

The Portuguese government has little leeway but “must resist calls for more austerity” and “some austerity was needed.” But,  “Don’t ask for more,” he said.

“I understand why the troika asks for more austerity, but I would say that it is enough because more austerity would be contra-productive,” Krugman said.

Portugal is getting 78bilion-euro ($104 USD billion) under a financial rescue program agreed last May with the European Union, and the International Monetary Fund. Portugal was the third Eurozone country after Greece and the Irish Republic to receive a bailout.