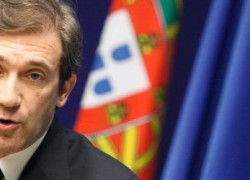 Portuguese Prime Minister, Pedro Passos Coelho, said Friday on Parliament that the country is “on track”  with the implementation of its bailout commitments and that although his administration has “lost no time” it still faces a “colossal effort.”

Passos Coelho announced that a provision was being considered for cuts in social security contributions by businesses and that he would be ready to discuss the move early next month.

The cuts will come in exchange for businesses contributing to a compensation fund for workers who lose their jobs under a planned easing of lay-off laws. On Thursday Coelhos’s government had proposed legislation in Parliament to slash compensation for laid-off workers.

António Saraiva, president of the Confederation of Portuguese Industry said the measure would make the workforce “more competitive” and reduce unemployment, but protesters rallied outside Parliament to denounce the new bill.

Trade unions charged that the measure will erode workers’ rights by making it easier to lay-off workers rather than providing for more work.

Passos Coelho, which government took office on June 6,  vowed to further  “faster and deeper” cuts than the former administration, pledging to take “permanent steps to shrink the public sector.”

He said his administration plans to cut the state’s spending ceiling by 10 per cent in 2012 with a “drastic reduction in the number of public workers.”

Passos Coelho  held his first joint meeting with Portuguese business and labor leaders, Wednesday, promising to present them with a three-year agreement proposal for discussion by the end of August.

He told them he hoped to bring government, business and labor together again at the beginning of September to discuss the  agreement.

Passos Coelho also said that no “durable reforms” were possible “without social peace,” but labor organization leaders voiced strong opposition to the new administration’s moves to implement the austerity measures agreed in May as a condtion for a 78 billion-euro ($113 USD billion) bailout sponsored by Portugal’s European partners.