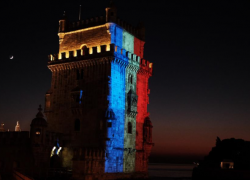 The first identified victim was Manuel Colaço Dias, 63, a native of Mértola, mainland Portugal, who emigrated to France 45 years ago.  Dias lived in Paris with his wife and two children. None of his immediate family was currently in France, since they were in Portugal gathering documents for the wedding of one of their sons.

Today, Portuguese Prime Minister, Pedro Passos Coelho, wrote a letter to the family, expressing “deep sorrow and dismay” for the tragedy which “will never be forgotten.”

On Friday, the President of Portugal, Cavaco Silva, sent a message to the French President, François Hollande, expressing his “dismay” over what he described as “heinous terrorist attacks.”

“It was with great dismay that I learned of the heinous terrorist attacks today in Paris, and the tragic loss of a large number of lives,” the Portuguese president said.

Portuguese police have boosted security at the French, British, American and German embassies in Lisbon in the wake of Friday attacks in Paris. Authorities have also taken additional security measures at the Lisbon, Faro and Porto airports.

The extremist terrorist Islamic State has claimed the Friday attacks in Paris, which caused at least 129 dead and 352 wounded, 99 in serious condition.