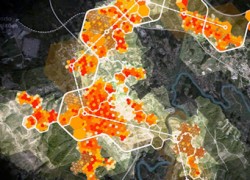 Living PlanIT, the Portuguese smart city initiative underway, was selected as one of the World Economic Forum’s Technology Pioneers of 2012, the Wall Street Journal reported.

Steve Lewis, a former Microsoft executive, is behind the Living PlanIT project to build a brand new smart-city in Paredes, Portugal. Smart cities have intelligence and remote sensors built into the very fabric of the city – its buildings use computing power to monitor and constantly adjust for optimal efficiency.

Paredes smart-city involves a plot of 4,125 acres (1,670 hectares), will encompass some 225,000 people. Several high-tech companies have already joined the fray, including Cisco, for the project that will cost a whopping $14.1 billion and will take about four years to complete.

Microsoft will provide the necessary cloud framework to coordinate the city’s integrated sensors with its Azure platform. These will allow real-time monitoring of everything from water and energy use to traffic management, improving the quality of life for residents while reducing the use of natural resources.

The Living PlanIT project has chosen Portugal because it offers a high level of education and location of universities near the project which will require significant levels of qualified and supporting less-qualified labor.

Steve Lewis worked for Microsoft Corporation until May of 2004 as General Manager of Market Development and Co-Chair of the Microsoft Business Development Forum. Currently he sits on several boards of commercial corporations, philanthropic foundations and government bodies.

Since 2000, the World Economic Forum has recognized the work of young companies that hold the promise of significantly transforming the way business and society operate.