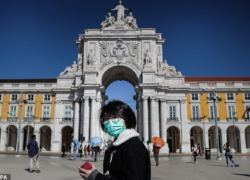 Official numbers this  Sunday’s revealed that 14 Portuguese nationals have died victims of the COVID19 epidemic. There were 1,600 confirmed cases, 320 additional cases in last 24 hours, with 169 hospitalized and 41 in intensive care.

Five patients have since recovered and 1,152 were waiting for test results. The total number of suspected cases is 12,562 to date.

The North and Lisbon and the Tagus Valley are the regions with the most deaths and confirmed cases.

Minister of Health, Marta Temido, stated on Sunday that 80 percent of confirmed cases are mild and that most patients are being cared at home. She expects infections to rise exponentially until at least the end of April.

State of Emergency in effect

Portugal has officially declared a State of Emergency in effect until April 3.  Measures include: (1) Restriction of movement except for trips to the food market, pharmacy, dog walking, and exercise; (2) Suspending non-essential businesses; (3) Closure of restaurants, except for delivery and take outs); (4) Banning on beach outings involving groups; (5) Measures for economic relief including support for affected businesses; (6) Call for national defense readiness to support  and enforce regulations.

Additional measures include that citizens avoid leaving their homes except to go to work, assist their families and accompany minors for recreation. People over 70, and those considered vulnerable, should only leave home to get essential goods, go to the doctor or walk their pets.

According to Portuguese law, the state of emergency, the first of its kind in the Portuguese history, can be extended indefinitely for periods of 15 days. Failure to comply with the orders can lead to arrest and fines between 400 and 2,200 euros.

The Central Government and the Regional authorities of the Azores and Madeira suspended the docking of cruise ships and yachts in their port until the end of March.

Travelers entering the country from abroad must self-quarantine for 14 days and will checked for temperature at the airport.

There at least 14,611 deaths worldwide, after the new coronavirus was first identified in December, and more than 329,299 cases of infection were detected in 171 countries and territories. The United states tops 32,356 cases in 50 states with 414 deaths to date. The major outbreaks clusters are in New York City, Washington State, and California.