Painter and Patron: The Maritime Silk Road in the Códice Casanatense – A Review 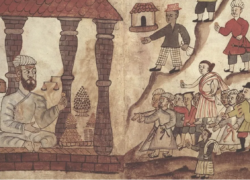 Philosopher Martin Heidegger once wrote about the conquest of the world as a picture while discussing the photographs as records of time “captured” through the camera. Though he was talking about photographs, the same could be said of all images in general, especially, paintings. A 16th century watercolour labelled “The Bengalis” from the Códice Casanatense is a textbook example of such conquests: the couple stands looking at each other, as do all the others in the series, but what is outstanding is the presence of the hibiscus flower grown and offered to the Goddess Kali in the region. The use of iconography of the region makes the entire series a unique tour of the world and a record of how it was conquered.

The Códice Casanatense, by Peter Gordon and Juan José Morales, is a fascinating album of 76 watercolours painted in the mid-sixteenth century at Biblioteca Casanatense in Rome. The paintings, annotated in the Portuguese, are a pictorial record of the countries and peoples the Portuguese were in contact with – from East Africa to southeast Asia. In their book Painter and Patron: The Maritime Silk Road in the Códice Casanatense, Peter Gordon and Juan José Morales present the paintings in the context of the era they were produced. The book is an interesting work in “close readings” of most of the pieces in the collection bringing alive the “authors” behind them. As Gordon and Morales discuss the scenes of everyday life and the couples depicted in the various pieces in the Codice, they uncover a fascinating case study in intertextuality surviving from that period. 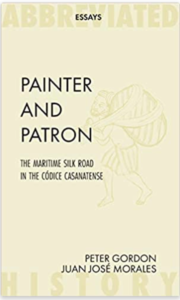 The authors argue that the paintings came into existence as a result of collaboration between a Portuguese casado (casados were men who settled down in India, married local women and even engaged in private trade) and a local artist. The former must have commissioned them: his brief would have consisted of a description of places and peoples he must have encountered in his career at Estado da India directly or indirectly. Gordon and José Morales suggest that the latter must have been an indigenous artist while pointing towards instances of inspiration from Indian traditions – illustrated scrolls, for instance.

The contents of the paintings themselves are diverse: scenes from daily lives – farming, bathing, work, rituals, and so on – and depiction of couples from all over the Maritime Silk Road covering Abyssinia, Muscat, Arabia and all the way to India. The book touches upon a lot of them highlighting patterns among them.

Although they lack much in the way of shading or perspective, there is nonetheless something appealing about these illustrations: they have a humanity that is often missing in the more formal paintings—from both East and West—of the period. The figures often have a hint of a smile or a twinkle in the eye; when arranged as a couple, the Codex’s most common format, one can on occasion discern what appear to be looks of real affection.

The larger point made in the book is that the paintings deserve more attention because they are the earliest surviving records of not just the subjects as depicted in them but as an exercise in anthropology. One painting depicting Hindu self-sacrifice is annotated: “Sacrifice that the natives offer to their gods by killing themselves with their own hands. And this Brahmin who is the priest of his pagoda takes the head in a bowl full of blood as offering to the pagoda”. The authors of the book remark:

By being a very human document, the Codex provides hints of what people—people other than writers who made a point of making a textual record— in 16th century Asia knew and what their interests and priorities were.

The Códice also goes against the grain of the textual records produced by the Europeans at the time. As the authors argue, it is a “European mental map of the world filtered through the eyes of an Indian painter”. Furthermore:

The world shown by the Codex is not the political world—it does not focus merely on places where Portuguese actually ruled—but a world of people, and peoples. It is furthermore a world, while informed by information from Portuguese sources, that is nevertheless seen through non-European eyes.

The investigation into the Códice is a remarkable contribution to uncovering a tradition widely prevalent in the visual culture of its times. The painting annotated “Honoured Portuguese people of India”, which is heavily inspired by a mural in the Trilokyanatha Temple in Tamil Nadu, in turn inspired an engraving in Dutch historian Jan Huygen van Linschoten’s Itinerario. There is at least one more number in the Códice that inspired engravings in Linschoten’s book and one more that influenced a late eighteenth century Company style painting.

In the process of addressing the questions of authorship of the Códice, Painter and Patron gives rise to further questions that need to be investigated. Why, for instance, is a painting titled after the trinity of Hindu deities when one of the figures depicted in it is clearly not one? An Indian artist would surely have been familiar with the iconography to be used while portraying Lord Shiva. Who annotated a painting “Brahmins of Goa, goldsmiths, gentiles” when goldsmiths were not Brahmins and why? The Códice needs to be probed to arrive at a better understanding of paintings and their times.

The Códice Casanatense, by Peter Gordon and Juan José Morales, is available at Amazon.com.

Soni Wadhwa lives in Mumbai, India. She has a PhD in English and is an academician and a content consultant. Her scholarly writing has appeared in national and international journals and as chapters in books. Her public outreach writing includes book reviews and these have appeared in the international Asian Review of Books, South China Morning Post, Scroll, and The Deccan Herald. As a content consultant, she works on developing content for the digital needs of brands across industries.