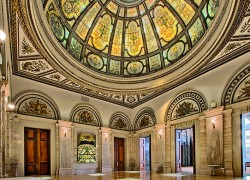 ♦  Portuguese American authors will gather at the Chicago Cultural Center, for the first “Kale Soup for the Soul” forum to be held March 2. According to the organizers, participating authors are writers of memoir, poetry, fiction and essay. The objective is to offer a public reading and share stories and poems about family, food and Portuguese culture.

For organizer Millicent Borges Accardi, the forum was named after the wildly popular series ‘Chicken Soup for the Soul.’ “Since soup is a comfort food and food draws people together, kale soup seemed appropriate for the name,” she said.

The “Kale Soup for the Soul” initiative started last summer after the Frank X. Gaspar’s “Writing the Luso Experience” workshop at the first DISQUIET: Dzanc Books International Literary Program in Lisbon, Portugal when, for the first time, about twenty Portuguese and Portuguese North American writers gathered to discuss the “marginalization” of Portuguese-American literature and the lack of presence of Portuguese American writers in the literary canon.

Accardi, who attended the Lisbon event, told the Portuguese American Journal: “I’d submitted a panel for the Association of Writers & Writing Programs (AWP) annual conference about the topic of Portuguese writers and their lack of role models which was turned down. Despite the fact that there had never been a Luso event in the history of the writers conference. So we thought a group of us would get together and plan an ‘off site’ event in Chicago at the next AWP conference. I researched various potential venues (bookstores, pubs, university meeting rooms, reading series, libraries) and eventually the Chicago Cultural Center partnered with us, providing a lovely space in their center.”

Therefore, the “Kale Soup for the Soul” forum is an official “off-site” event for this year’s annual Associated Writing Program (AWP) conference (last year the conference was held in DC and attracted 11,000 participants).

The group is looking forward to having additional readings held elsewhere. They would like to read again in Boston at the next AWP conference. According to Accardi, “There is talk of taking ‘Kale Soup’ on the road to New York and Boston. Perhaps San Francisco or Fresno – areas with large Portuguese populations. We also have a table at the (AWP) conference book fair this year, co-sponsored by Tagus Press where we are offering 30 titles of books for sale by Portuguese-American and Portuguese writers. We think this is also the first time there has ever been an exhibitor for Luso books at the book fair.”

For this first event, the Chicago Cultural Center is providing the venue in addition to other logistic support. Other supporters and donors include local musician Gabriel Chapman, Live Music; Tagus Press and The Portuguese Heritage Society (donations of books for raffle); The Italian American Human Relations Foundation: Lou Rago, President (wine) and the Poetry Bordello of Chicago (snacks).

“Kale Soup for the Soul” is not a club or group. It is the name of an event. Yet, a “group” was formed privately on Facebook, called Presence/Presença: Presence/Presença, a discussion forum for Portuguese-North American writers and writers of Lusophone-countries descent.

“It was named after the ‘Presence’ Movement and the important Portuguese literary journal Presença (1927-1940), as an address to the absence or marginalization of literary voices from the “Lusosphere” in contemporary American letters,” Accardi said. 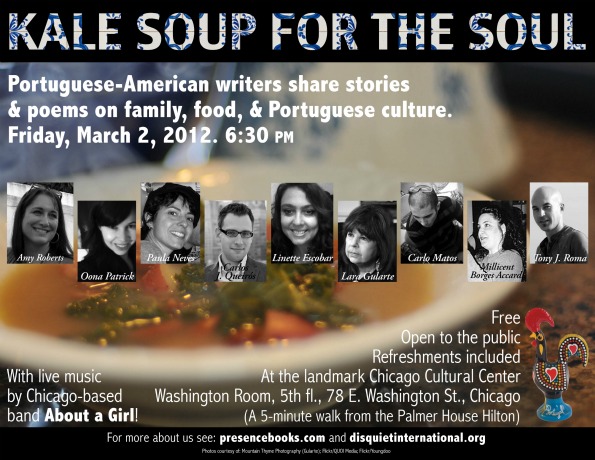 (*) Oona Patrick’s nonfiction has appeared in Provincetown Arts, Gulf Coast, Salamander, and Gávea-Brown; she has notable essay citations in Best American Essays and Best American Travel Writing. She is a nonfiction editor of Post Road magazine and Luso-American Liaison for the DISQUIET International Literary Program in Lisbon.

Paula Neves’ writing has appeared recently in Prime Number, Harriet (the news blog of the Poetry Foundation) and The Newark Metro, and is forthcoming in New Laurel Review. She teaches composition at Rutgers-Newark.

Linette Escobar is a Portuguese-American poet whose work has appeared in literary magazines including Transfer and The Santa Clara Review. Currently, she is working on a memoir about her experiences volunteering with Burmese migrants in Thailand after the 2004 tsunami.

Frank X. Gaspar is the author of two novels and four collections of poetry. He is the recipient of a Barnes and Noble Discovery Award, an NEA Fellowship, and three Pushcart Prizes. He has just finished a fourth collection of poems.

Millicent Bórges Accardi is the author of three poetry books: Injuring Eternity, Woman on a Shaky Bridge and Only More So (forthcoming). She has received fellowships from the NEA, California Arts Council, Barbara Demming Foundation and CantoMundo.

Carlos J. Queirós attends the Iowa Writers’ Workshop. His work has appeared in My Generation, AARP, and Críticas Magazine. His awards include a Frances Tebet Israel Prize and Dzanc Books/Luso-American Foundation scholarships to attend the Disquiet literary program in Lisbon.

Tony John Roma received a Bazzanella Literary Award for Short Fiction and his work has appeared in Sacramento Literary magazines.

Carlo Matos is the author of two books of poetry (A School for Fishermen and Counting Sheep Till Doomsday) and one book of scholarship (Ibsen’s Foreign Contagion). He teaches writing at the City College of Chicago.

Amy Sayre-Roberts lives and writes between two places that shaped her family: the Madeira Islands and Eastern Tennessee. She teaches at Benedictine University, and is an associate poetry editor at Quiddity Literary Journal. Her latest publication is forthcoming in Ninth Letter.