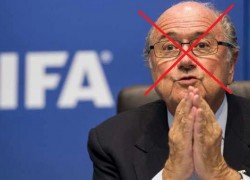 Fans of Portuguese footballer Cristiano Ronaldo are outraged over a remark by Joseph [Sepp] Blatter, FIFA’s president, regarding the Real Madrid attacker. Fans are accusing Blatter of bias against Ronaldo, demanding Blatter’s immediate resignation. The 78 year old Blatter, who is Swiss, has been FIFA’s president since 1998.

Blatter poked fun at the 28 years old Cristiano Ronaldo during an on camera debate at the Oxford Union. He remarked that he preferred FC Barcelona’s Lionel Messi to Cristiano Ronaldo who plays attacker for Spain’s Real Madrid. Blatter also mocked the Real Madrid for, as he said, “having more expenses for the hairdresser” than the Barcelona player.  Blatter said both players were “exceptional” before describing Messi as a “good boy” and referring to Ronaldo, as “one has more expenses for the hairdresser than the other.” He concluded by saying he preferred Argentian Messi of the two players.

“They are both exceptional players but they are totally different and football is about the difference of styles, because Lionel Messi is a good boy who every mother and father would like to have at home […] He’s a good man, he’s very fast, he’s not exuberant, he’s playing well, he’s dancing, he’s a kind man, he’s a good boy […] And that’s what makes him so popular and naturally he will always get a lot of goals because he is this nice man, and he plays well and scores goals […] The other one, this is something else. The other one is like a commander on the field of play […] But this is the other side of football and that’s good to have such commanders on the field also. Because you don’t have the same attitude, and that gives life to football and one has more expenses for the hairdresser than the other, but that doesn’t matter […] So, I cannot say who is the best. The [Ballon d’Or] list will be published on Tuesday, and then the public will make the choice […] I like both of them, but I prefer Messi.”

Ronaldo reacted on Facebook by saying, “This video shows clearly the respect and consideration that FIFA has for me, for my club and my country. Much is explained now. I wish Mr. Blatter health and a long life, with the certainty that he will continue to witness, as he deserves, the successes of his favorite teams and players.” The remarks also provoked a letter from Real Madrid demanding an apology from Blatter.

Meanwhile, a page calling for the “Resignation of Joseph Blatter” was created by Ronaldo’s fans on Facebook directed to “all those who demand the resignation of Joseph Blatter, the  FIFA president.”  Fans are demanding “respect for Cristiano.”  In less than 24 hours the Facebook page reached over 100,000 subscribers. Additional Facebook pages are being created demanding for Blatter’s resignation.

In addition, a ‘Public Petition’ online demanding the immediate resignation of the FIFA’s president, has gathered over four thousand signatures.

Former Portugal international Paulo Futre has also accused FIFA’s president of insulting Cristiano Ronaldo. “Blatter should resign at once. You should not be able to attack one of the symbols of the game and get away with it.” Futre said.

Real Madrid’s coach, Carlo Ancelotti also remarked that Blatter’s comments revealed a “lack of respect,” for the Portuguese footballer and asked for a retraction.

Blatter’s comments also drew an angry response from Fernando Gomes, president of Portugal’s Football Federation, describing the remarks as “unfit and inappropriate”. Gomes said it was “inappropriate” that on the day Ronaldo was nominated for the FIFA’s Ballon d’Or Award, Blatter would show public preference for Messi.

Ronaldo and Messi were both on a 23-man shortlist for FIFA’s Ballon d’Or Award which was announced on Tuesday.  Messi has won the award for the last four years, with Ronaldo finishing runner-up to the Argentinian the last two times. The favorite this year is the Bayern Munich midfielder Franck Ribéry. The winner will be announced on January 13, 2014.