Out of the Gutter Comedy is serious laughter – Fall River, MA 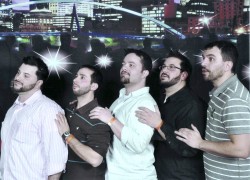 By Carolina Matos, Editor – Out of the Gutter Comedy is a theater production company based in Fall River (MA), run by first generation 30 something Portuguese Americans.

Derrick told the Portuguese American Journal, “I am here four to five days a week. Although I work a part time job, this is pretty much my full time job. I manage all the comedy jobs we do, all the bookings, all the negotiations all that stuff.  I do the promotion on the Internet. So it is a team effort but in that aspect I do lots of things.”

Out of the Gutter Comedy has quite a unique brand of humor – they make fun of themselves – and they have performed in many festivals and occasions, namely the fourth annual Providence Improv Fest.

The troup is enjoying a huge success with most shows sold out weeks in advance. “We are doing a show at the Cultural Center in Fall River, we call it — the Portuguese Pride Comedy Tour — and we sold it out. We sold out 700 tickets for two nights,” said Derrick. 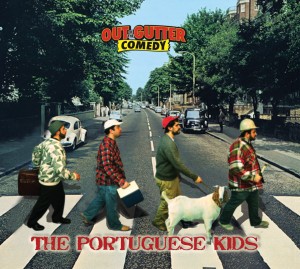 Performing collectively since 2004, last year was their busiest with 70 shows. This year they performed 25 shows and expect to meet last year’s number of performances. They have performed mostly around South Eastern New England.  But they also have ventured as far as California, Atlanta, Toronto and Winnipeg. “It’s been busy. We are having fun and we don’t mind doing it,” said Derrick.

The productions are getting bigger and better because, as Derrick explained, “We are expanding and we are putting on a good product. People come to our shows and they walk out happy. For a lot of people the first thing they do is to let other people know about this comedy. A lot of times they come back with a group and so on. So a lot of our business is people bringing their friends and their families to the show.”

Indeed, the response seems to be overwhelming. The audience is responding by coming back in numbers. They come back for more, looking for some nostalgia and a little fun. They end up laughing at themselves. Each show takes an average of an hour and a half to two hours and uses improv.  Members of the audience are encouraged to participate with an idea and, as Derrick said, “We take that idea and we create a scene.”

People also come to the comedy show to meet other people and to laugh at each other together. They are working class Portuguese Americans most of them children of immigrants themselves,  “It’s like a family gathering,” said  DeMelo, “People come back, sometimes more than five times, and they walk away with this feeling of pride. Some come up to us to say that they enjoyed the show because it reminded them of stuff they used to do growing up with their parents and grandparents. They come for the laughs and they leave feeling reconnected with their heritage.”

The group draws most of their material from their own life experiences and they have learned a lot about themselves and others by exploring their heritage. “It is like being part of an exclusive members’ only club,” Derrick explained, “We talk about things that only we can understand.  We draw our material from our parents, our families, our friends. This show is meant to celebrate who we are. It is not to poke fun at anyone. We are having fun doing it together because it is all about community feeling. It’s about people coming together to connect and reminisce.” 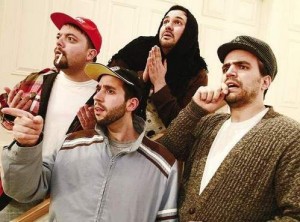 Fall River is a depressed city with the highest unemployment rate in Massachusetts. What are people laughing about?—we inquired.

From Derrick’s perspective, “Right now people need a laugh and there is not a lot to laugh about. We are cheap and people can come to our show for ten dollars and enjoy a night out. They forget about their worries for a couple of hours. I think that people really appreciate that.”

As for future plans, according to Derrick they are confident this is just the beginning for the group. He said, “We have not even been in Rhode Island and we have to go back to California where we have been four years ago. We just started going to Canada and there is New Jersey, Florida, Connecticut and still so many other places.”

For him, the focus now is to expand by doing more shows for people to connect and laugh together. “Who knows what the future will be. We have ideas and we are always ready,” he said.

Apparently there is a lot to celebrate already. Derrick feels an enormous sense of pride for what they have accomplished so far. He said, “I took an acting class in school and the teacher told us that getting a job as an actor was almost impossible. She said that most likely none of us would get a job as an actor. So we decided to make our own jobs and we created our own show. We did everything on our own and we are very proud of that.”