Not for the first time, Spain looks like following in the footsteps of its much smaller neighbor.

It’s not quite on the grand scale of the Spanish taking their cue from the Portuguese in the Age of Discoveries, or in switching from dictatorship to democracy in the 1970s.

However, the outcome of Sunday’s general election in Spain may turn out to be as muddled as the recent political events in Portugal, giving rise to even greater worries within Europe about instability, as Spain is the EU’s fourth biggest economy.

The pre-election polls in Spain showed not much separating the conservative ‘Popular Party’, the center-left ‘Socialists’ and the slightly right-of-center ‘Ciudadanos’ (‘Citizens’) party.

The recent rise of ‘Ciudadanos’ to rival the two established parties has been spectacular. The surge in popularity of the new anti-austerity ‘Podemos’, follows that of Portugal’s ‘Left Bloc’ and Greece’s ‘Syriza’.

To form a government straight away, one of the parties must win more than 50% of the seats in parliament in Sunday’s election.

As with the conservative coalition in Portugal before the 4th October election here, the ‘PP’ in Spain is likely to gain the most votes but not a majority.

If so, King Filipe VI will enter the fray as did President Aníbal Cavaco Silva in Portugal. He will nominate a prime minister who will then seek the backing of at least 50% of the elected members of parliament.

This will involve horse-trading in which the party with the most votes might be able to drum up support from one of the others and emerge with a mandate to govern.

If such a backing does not materialize, the Spanish tradition is to have a second ballot among elected members of parliament within 48 hours.

‘Ciudadanos’ might not win the most votes at any stage but they could be pivotal. As a centrist party they might give conditional backing to either the conservatives or the socialists – or they might receive such backing.

A grand coalition between the conservatives and socialists is thought unlikely. Where, of if, ‘Podemos’ could fit into any mix is anyone’s guess.

But the improbable is not impossible as demonstrated in Portugal where a trio of losing parties ended up determining the government.

The voter turnout in Spain may be higher than in Portugal because of the colorful choice of characters involved.

The PP’s Mariano Rajoy, 60, has been a surprisingly introverted prime minister who asked his deputy, Soraya Sáenz de Santamaría, to replace him in a televised debate with the other party leaders. On Wednesday he was punched in the face by a teenager at a campaign rally in his home region of Galicia.

The relaxed, down-to-earth, Pedro Sánchez, 43, is a tall and handsome former economics professor and basketball player who towers over his political opponents physically.

The gentlemanly leader of ‘Ciudadanos’, Albert Rivera, is only 36-years-old, a lawyer who first came to prominence by appearing on a campaign poster naked but for a leather jacket.

Pablo Iglesias of ‘Podemos’ is a easy-going 37-year-old professor of political science who in a way epitomizes the radical left by shunning quality suits and sporting a pony-tail hairstyle.

One way or another, it’s measuring up to be an unusual Christmas for politicians in Spain. If things remain messy rather than merry, a second general election will have to be held two months into the new year. 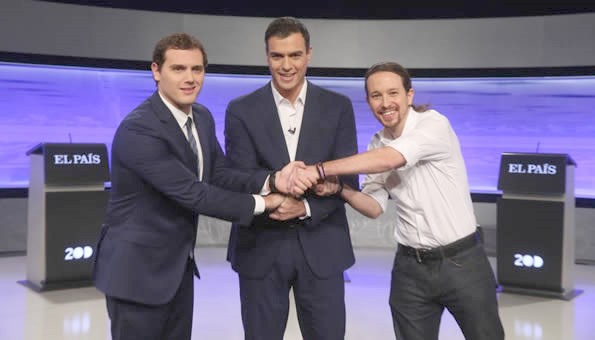 Albert Rivera, Pedro Sánchez and Pablo Iglesias greet each other before
the debate promoted by the daily El Pais.