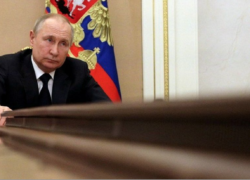 The bizarre behavior of President Vladimir Putin continues to astound analysts across the Western world. It could be just the way this enigmatic narcissist wants it to be.

Most ‘normal’ people in Portugal and elsewhere are skeptical of the political elite. They distrust them. Putin is currently top of the heap.

The center-right president and center-left prime minister of Portugal, which is internationally rated as one the five most peaceful countries in the world, may not be totally admired by all Portuguese voters, but at least they are considered to be sound of mind. Putin on the other hand is widely perceived to be anything but.

Meanwhile, many psychologists and investigative journalists using open source materials have concluded that Putin is probably a psychopath. The presence of a psychopath in any community is worrying at the best of times, but one with so much power and global influence as Putin is of course exceptionally dangerous.

Many of the personality characteristics of a psychopath are observable and they include a grandiose sense of self-esteem, an uncontrollable tendency to commit violent activities, a compulsive need to tell lies and antipathy to love and a lack of remorse or shame.  Psychopaths are often highly intelligent, but usually have poor judgement and a failure to learn from experience.

In Putin’s case as in many others, it probably all started with a very traumatic childhood. He was born in Leningrad (now St Petersburg) in 1952. An estimated 800,000 people in the city had been killed during the 900-day Nazi siege in World War ll. Putin’s father was severely wounded while serving in the Russian army. His mother almost died of starvation. The couple lost two children before Vladimir’s birth.

According to reliable sources such as The Atlantic news magazine, his family lived in a single room in a rundown apartment with two other families. As his mother and father worked hard just to survive, it’s thought their small son went without proper parental care, sufficient food, emotional warmth, respect and kindness. He had few friends and was bullied by neighboring thugs whom he learned to viciously defend himself against.

He grew up to be an intelligent lad, did well at high school and went on to get a university law degree. But the damage to his mind had probably already been done and was irreversible.

A great many people in Portugal, Ukraine, Russia and perhaps every other country in the world have mental health problems that are not nearly as severe as psychopathy and are treatable medically and with compassion. Unfortunately, in extreme psychopathic cases this is difficult because egocentricity, rigid pathological defence mechanisms and other harsh factors will not allow it. That does not mean psychopaths do not deserve support. But nor does it mean that acts of violence by them should be justified.

While serving with the KGB, Putin’s career had produced “a macho, distrustful, unpredictable, cultivator of half-truths and disinformation who remains culturally and psychologically tied to a Soviet Union that no longer exists,” according to a source quoted in the American journal Foreign Policy.

Madeleine Albright, the U.S. secretary of state from 1997 to 2001, met Putin as the newly appointed acting president of Russia in 2000. In an article in the New York Times last month she recalled: “Putin spoke unemotionally and without notes about his determination to resurrect Russia’s economy and quash Chechen rebels. Flying home, I recorded my recollections. ‘Putin is small and pale,’ I wrote, ‘so cold as to be almost reptilian’.”

The former president of Latvia, Vaira-Freiberga, who has a degree in psychology, has said that Putin has become “unhinged”, adding that invading Ukraine “was not the actions of a sane man interested in the welfare of his country.” In an interview with Global News, part of the Canadian Global TV network, she variously described Putin as “a narcissist and a psychopath, with no conscience whatsoever. And he is a megalomaniac. He is definitely megalomaniac with very strong paranoid tendencies.”

Putin’s decision to launch his brutal invasion of Ukraine has made many other Western observers question the mental state of the man in charge of the world’s largest stockpile of nuclear weapons. Foreign Policy has noted that those who have followed the Russian leader’s behavior closely over the years have been struck by the bizarre and dark nature of his recent speeches in which he described Ukrainian leaders as a “gang of drug addicts and neo-Nazis.”

Andrea Kendall-Taylor, a senior fellow at the Center for a New American Security who previously worked as a senior Russia analyst at the CIA, has said that given the implications for the world, the U.S. intelligence community has teams of people, including doctors and psychologists working at the CIA’s secretive Medical and Psychological Analysis Center, devoted to analyzing the physical and mental health of authoritarian leaders, including Putin. “They use a variety of methods, including scrutinizing speeches and body language, to detect subtle shifts,” she told FP.

Charles Morgan, a forensic psychiatrist who previously worked for the CIA, told the magazine. “Although the science of indirect assessments is young at this stage, it seems to be true [that] a person’s past behavior is a more reliable indicator of how they will behave in the future than what they say they will do in the future.”

An article in the The Spectator in the UK said that “sitting at the end of an absurdly long table or marooned behind a vast table in a palatial hall, Vladimir Putin’s idea of social distancing has gone beyond the paranoid and into the realm of the deranged. His distance from reason and reality seems to have gone the same way. In little more than 48 hours, Putin’s sensible, peace-talking statesman had flipped into something dark and irrational that has worried even his supporters.”

John Sipher, a former senior member of the CIA’s Clandestine Service who served in Russia, has said that getting information from a leader’s inner circle in countries like Russia and China, which are regarded as “hard targets” by intelligence agencies, can be especially tricky. “Sources don’t grow on trees, and it’s especially difficult in a place like that. The rest of us are left to pour over Putin’s speeches and acts as the world wants to see what his next move may be.”

Len Port is a journalist and author. Born in Northern Ireland, his first written pieces were published while he was working in the Natural History Museum, London. Since then he has worked as a news reporter, mainly in Hong Kong, Northern Ireland, South Africa and Portugal. In addition to reporting hard news for some of the world’s leading news organizations, he has produced countless feature articles on all sorts of subjects for a range of publications. Now living in southern Portugal, his books include travel guides and children’s stories. His ebooks – People in a Place Apart and The Fátima Phenomenon – Divine Grace, Delusion or Pious Fraud?are available from Amazon.com and amazon.co.uk. His blog posts can be viewed at algarvenewswatch.blogspot.com