Opinion | Portugal’s population on the decline – By Len Port 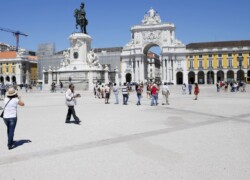 The global population, according to the United Nations, reached 8 billion and is still rising, while Portugal’s population was said to have been 10,126,454 and falling.

United Nations statistics show that in 1950 the global population was only 2.6 billion. In 2011 it had risen to 7 billion. It is predicted to reach 9.7 billion in 2050 and 11 billion in 2100, catastrophic climate change and wars permitting.

China is the country with the largest population (1.4 billion), but India is expected to overtake it next year. Far behind are the United States, (332 million) Indonesia (276.5 million) and Brazil (214 million).

The former Portuguese colony of Angola in south-western Africa, with 34 million inhabitants, has the third fastest growing population in the world with 3.4% per year.

Germany is the most populated of the European Union’s 27 member states with well over 83 million. Portugal is by no means among the lowest in the EU and has numbers close to those in Sweden.

Portugal’s population has shrunk by 2% in the last decade, and it continues to decline because of the low birth rate and the high number of young people emigrating to other European and North American countries.

In 2020 the birth rate in Portugal was 1.40 per woman. So the birth rate has indeed been low and it has been low and declining in many other places too. The reasons are said to include women’s empowerment in education and the workforce, lower child mortality and the increased cost of raising children.

People are on the move, both inside and outside their country of birth. The number of people leaving Portugal of late has been about 80,000 a year. Most have been seeking further education or better economic opportunities. Similar reasons across the world have pushed people into moving from rural areas into cities. It is expected that 70% of the world’s population will live in cities by 2045.

They are plenty of advantages in living in large urban areas such as Lisbon and Porto with populations of 518,000 and 250,000 respectively, or in mega-cities such as New York with more than 8 million inhabitants and London, with more than 9 million. One of the big disadvantages of many large urban areas is poor air quality and its impact on health.

Climate change, conflict and political instability are expected to cause much more international migration in the coming years.  The flood of refugees from Ukraine is likely to be replicated from African nations if they are made almost uninhabitable by extreme heat, drought and resulting desertification.

The relatively well-off foreigners who have moved to reside in Portugal have done so mainly because they are made welcome by friendly people in a peaceful and beautiful country with a Mediterranean climate featuring mild winters.

Expatriate residents here account for 6.4% of the total population with about 184,000 Brazilians and 46,000 British. Many foreigners in the last two years have come from a number of other EU countries as well as from Ukraine.

The percentage of people aged 65 and over in Portugal has been increasing and last year reached more than 23%. The elderly are becoming more numerous is in many countries as life expectancy rises. Life expectancy in Portugal has risen from about 60 in the mid-1950s to a little over 82 nowadays. This trend may continue globally, but it depends very much on overall human behaviour.

Because of such factors as man-made greenhouse gas emissions and violent conflicts, about 700 million people or 9% of the global population are estimated to be living in extreme poverty, that’s to say on less that €2 a day.

One of the worst affected places is the large island state of Madagascar situated off the east coast of Africa. People there have long been experiencing desperate hardship because of poor administration, droughts, insufficient irrigation and drinking water, crop failures and criminal gangs stealing cattle and commodities.

According to the UN’s World Food Programme, as of the middle of last month 8.8 million people across Madagascar (about 33% of the entire population) are suffering from acute food shortages. That’s one million more than just three months ago. Further deterioration is expected between next month and March next year when two million more people are likely to be going hungry.

In his book Origins, a deeply detailed account of the evolution of all species of life from geological, paleontological and biological perspectives, Frank H.T. Rhodes concludes “A single species – ours – now has the capacity to influence or disrupt not only the natural rhythm, distribution and future patterns of life on Earth, but even its survival. In the billions of years on the planet that is a unique and sobering capacity.”

As far back as 1929, between the First and Second World Wars, the neurologist and founder of psychoanalysis, Sigmund Freud, wrote at the end of his book Civilisation and its Discontents: “The fateful question for the human species seems to me to be whether and to what extent their cultural development will succeed in mastering the disturbance in their communal life by the human instinct of aggression and self destruction…. Men have gained control over the forces of nature to such an extent that with their help they would have no difficulty in exterminating one another to the last man.”

That is as true now as it was then.