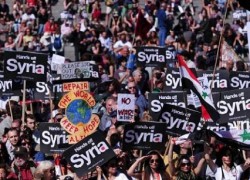 While the main international organizations with which Portugal is most closely associated have all condemned the use of chemical weapons in Syria, there is no consensus yet on what should be done about it and little support for President Obama’s call for military intervention.

NATO and the European Union believe the Syrian government was responsible for the chemical weapons attack near Damascus and must be censured in some way, but neither body has fully spelt out how. The Vatican is adamant that military action would be “futile” and should be ruled out in favor of diplomacy.

NATO Secretary-General Anders Fogh Rasmussen insists that a firm international reaction is needed to show not only President Bashar al-Assad, but also dictators around the world, that such weapons cannot be used with impunity.

“It would send a dangerous signal to dictators all over the world if we stand idly by and don’t react,” said Rasmussen.

NATO, of which Portugal is a founder member, has stopped short of offering to get involved militarily, at least for now. It would, however, strongly defend Turkey if this member state were attacked in any widening of the Syrian conflict.

On President Obama’s call for a punitive military strike, Rasmussen said, “I’d envisage a very short, measured, targeted operation, and you don’t need the NATO command and control system to conduct such an operation.”

EU defense ministers meeting in the Baltic state of Lithuania agreed that the evidence presented so far indicates that the Assad regime was behind last month’s chemical weapons attack on his own people. The ministers agreed that “those responsible must be held accountable” and tried by the International Criminal Court, but there was no mutual support for military action.

The French government is the most hawkish and the only European country likely to materially back any American strike, even though polls show that the majority of the French people would oppose it. 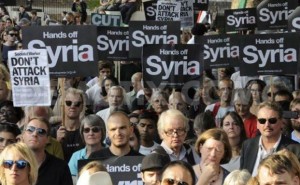 The Vatican’s view is unequivocal. Pope Francis wants an end to the “senseless massacre” of innocent people in Syria. He has called for a negotiated diplomatic settlement to the prevailing “one-sided interests.” The Vatican insists the main priority should be to stop the current violence that risks involving other countries and creating “unforeseeable consequences in various parts of the world.”

An opinion poll conducted before last month’s chemical weapons attack indicated that 80 per cent of Portuguese respondents rejected military action in Syria. Almost three-quarters of all Europeans and 62 per cent of Americans questioned in the survey said their government should not intervene in the Syrian civil war.

Portugal, like other NATO, EU and Catholic countries believes that Syria’s flagrant breach of international law banning chemical weapons must be condemned, but it is concerned that a military strike may jeopardize the prospects for peace and make any United Nations Security Council resolution all the more difficult.

Russia’s President Putin has said the “ridiculous” suggestion that the Syrian government was to blame for the attack was “a provocation by those who want to drag other countries into the Syrian conflict.”

The Iranian government has said a foreign military response could turn the civil war in Syria into a regional conflict. Intelligence reports indicate that Iranian-backed Shiite militias are threatening retaliation inside Iraq should the US strike Syria.

The pro-Assad Hezbollah militant group in Lebanon has reportedly put “tens of thousands” of fighters and reservists on alert in anticipation of a US strike. A Hezbollah response to US action could involve Israel.

In the meantime, confused and divided Syrians of all religious and political persuasions are reportedly trying to prepare for some sort of US intervention but do not know what President Obama means by a “limited” attack and what consequences it could have.