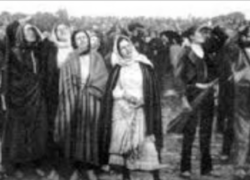 A crowd, said to have numbered as many as 70,000, witnessed the so-called Miracle of the Sun above the village of Fatima in central Portugal on 13th October 1917. But was it really a divine miracle, or is it all a bizarre myth?

The event occurred during the First World War and just a few years before Russia formed the Soviet Union. The latter is of special relevance to the Fatima faithful because of Russia’s present war in Ukraine. The 1917 crowd gathered in response to a prophecy aired by three local shepherd children who claimed to have been in contact over the previous five months with the Virgin Mary, whom they referred to as Our Lady of Fatima or Our Lady of the Rosary. They said she had told them to pray for peace and that she would perform a miracle that October.

On a stormy, wet afternoon, many in the crowd said that for a period of about ten minutes the sun resembled a silver disc. It appeared to tremble, dance and zigzag down towards the Earth amid a vivid range of colours. Scientists have always dismissed the notion that there was any unnatural solar activity. Noting that there were inconsistent and contradictory comments among the crowd, sceptics have suggested that believers had deceived themselves with wishful expectations.

The Catholic Church itself harboured doubts and it was not until 1930 that it was officially declared a miracle “worthy of belief.”

By that time Church and State in Portugal had been separated by a constitutional decree. It was during Portugal’s First Republic, which ran from 5th October 1910 to May 1926. The State was fiercely critical of the Catholic Church, which had been the national religion with a huge following since the founding of the nation on 5th October 1143. Governments during the First Republic would like to have eliminated it, but the Church found solace and strengthened resistance in the ever-increasing public following of the apparitions reported by the three shepherd children on the 13th of each month, May to October 1917.

The separation of Church and State was further cemented into Portugal’s constitution in 1976, two years after the ‘Carnation Revolution’. The two have enjoyed a trouble-free relationship ever since. Modern governments have appreciated the economic contribution to tourism by the Sanctuary of Fatima, which each year attracts millions of pilgrims from around the world. The figure for the centenary year, 2017, reached 9.4 million from about 100 countries who came to the Sanctuary for prayer and to express adulation.

As all pilgrims are aware, the Blessed Virgin is said to have entrusted the visionary children with three “secrets” one of which warned that communist Russia would “spread its errors” unless it was “consecrated to my immaculate heart.”

The eldest of the children, Lucia Santos, said the request was repeated to her by the Virgin Mary in an appearance in 1929. Why a matter of such geopolitical importance had been revealed in the first place only to unschooled children, indoctrinated with Catholic dogma by their peasant mothers in the remote Portuguese countryside, may not bother Catholics, but Humanists put it all down to delusion.

The act of consecration became a highly controversial subject, especially among traditionalist Catholics who consider all the popes since the Second Ecumenical Council of the Vatican in the 1960s to be heretics. Three of these popes carried out consecrations without naming Russia. Only in March this year was the consecration carried out with the specific mention of Russia by Pope Francis. At the same time, the pontiff named Ukraine against which the Russians had launched their invasion one month earlier.

If the Miracle of the Sun and the Blessed Virgin’s wishes are not merely mythical, peace may at long last soon envelope the world, however unlikely that currently seems.
——————