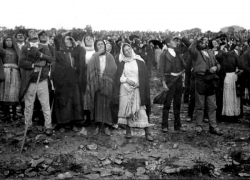 While the media focus was on Pope Francis and the centenary celebrations of the miraculous apparitions at Fátima, a Vatican-sponsored academic conference was debating more scientific celestial goings-on.

Before getting on to revelations about the papal interest in cosmology and astrophysics, let’s recap on the more down-to-earth issues.

Over the past one hundred years, the global expansion and enduring strength of devotion to ‘Our Lady Fátima’ has been steeped in ironies, paradoxes and allegations of what is now popularly called ‘fake news’.

On 3rd May 1917 three children tending sheep, in a remote field in central Portugal, claimed to have witnessed an apparition of someone they took to be the Blessed Virgin Mary. Even close relatives, including the mother of the principal visionary, accused them of lying.

Inconceivable though it was a hundred years ago, Pope Francis came to the very same spot to make two of the visionaries saints and join an estimated million pilgrims from many countries in prayers that were streamed live on computers and iPhones around the word.

Strange as it may seem, the name of what has become one of Christendom’s most famous places of pilgrimage takes after a daughter of the Islamic Prophet Muhammad.

Soon after the creation of the Kingdom of Portugal in the 12th century, a Christian knight is said to have kidnapped a Moorish princess called Fátima and taken her to a village in the hills near the present town bearing her name. Fatima fell in love with her kidnapper and they married, but not before she had converted from Islam to Christianity.

Whether this romantic tale is entirely true or not, is neither here nor there compared to the loathing of the growing number of Fátima faithful clearly expressed in 1917 by a Portuguese republican government hell-bent on eradicating religion from the country.

Half a century later, severe criticism began to be levelled at the Vatican hierarchy from within the Catholic Church itself. Traditionalist Catholics have concluded that following the reforms of the Second Vatican Council, introduced in the1960s, all of the popes have been heretics.

Traditionalists also denounced the Vatican’s explanation in the year 2000 of the long-withheld text on the so-called “Third Secret” as a ‘cover-up’ of the true apocalyptic meaning of ‘Our Lady of Fátima’s message’.

The ‘Second Secret’ of Fátima is generally accepted as a warning of another world war if Our Lady of Fátima’s request to ‘consecrate’ Russia was not carried out. During the First World War, the 1917 Russian Revolution turned the country into a communist republic, the precursor of the Soviet Union.

The act of consecration to “the immaculate heart of the Blessed Virgin Mary” was never properly carried out, according to some traditionalists. It was more evidence, they said, that the Vatican was under heretical control.

Coincidental or not, Russia now seems to be trying to assert control and spread propaganda and political chaos internationally, as it did in 1917. It was Russia’s meddling in the last U.S. presidential election that sparked the FBI investigation and subsequent turmoil over Donald Trump’s ties with Russia.

One way or another, allegations of lies, conspiracies, misinformation and fake news are being bandied about today as they have been at least since 1917.

None of this fazed the vast number of pilgrims at the Shrine of Fátima, united in their devotion to the Virgin Mary, who has been described by Pope Francis as “the Mother of Hope”.

Meanwhile – and here’s the rub – scientists from around the world were attending a conference hosted by the Vatican at its observatory near Rome to discuss “Black Holes, Gravitational Waves and Space-Time Singularities”.

The idea is to dispel conflict between faith and science while we all continue to search for truth in understanding the mysteries of the universe.

If you haven’t heard of this conference you might be scratching your head, but it is NOT fake news. It is possible for scientists to take miracles seriously, especially the famous ‘Miracle of the Sun’ at Fátima. The Catholic Herald newspaper quoted a former particle physicist as saying, “Why not?”

The paper added: “Contrary to a common prejudice, a scientific perspective does not rule out miracles, and the event at Fátima is, in the view of many, particularly credible”.

Even so, it is going to be a hard job persuading most cosmologists and astrophysicists that when the sun supposedly went haywire for ten minutes at Fátima in 1917, it was in fact a pre-planned supernatural miracle.