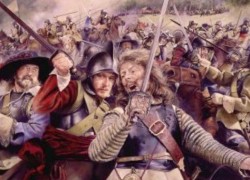 Economic chaos, political scandals, social violence, revolutions and wars punctuated by natural disasters sparked by extreme weather conditions dominate the headlines across the world in the second decade of the 21st century.

We tend to think we live in unique times, but the world has seen it all before. This fact is vividly portrayed in considerable detail by the distinguished British historian Geoffrey Parker in his latest book, Global Crisis: War, Climate Change and Catastrophe in the Seventeenth Century.

The big events during the unprecedented global crisis back then included the Thirty Years War in Europe, civil war in England, massacres in North America, the cruelty of the Inquisition, expansion of the African slave trade and devastating bubonic plagues.

There are plenty of modern parallels, such as 34 years of war in Afghanistan, civil war in Syria, massacres in Africa, extraordinary rendition and torture in the ‘war on terrorism’, international human trafficking and HIV/AIDS.

At this time four centuries ago Portugal was under Spanish rule, but some would argue that this was less harmful than being a member of the Eurozone and succumbing to the Brussels-based ‘Troika’.

There is a familiar ring today to the 17th century Ottoman historian Haji Khalifa’s description of his homeland as being “sick because of corruption, high taxation and oppression of the masses.”

Fairly sophisticated printing presses back then facilitated the spread of opinion from other critical thinkers such as Galileo and Isaac Newton, though not with the same efficiently that all and sundry can now air their views via social media.

The early 17th century was the so-called Age of Reason, precursor of the Age of Enlightenment. Whatever became of it? Much of the world in the early 21st century is still steeped in mythology and superstition.

Compared with troubled countries with much longer histories, such as Egypt and Greece, Portugal still remains relatively calm and organized, but there is no end in sight to the simmering economic, social and political turmoil here.

And then there is the added danger of climate change.

Life in the 17th century was made worse not by global warming but by global cooling. Longer and harsher winters followed by cooler and wetter summers disrupted growing seasons. Famine, malnutrition and disease wiped out an estimated one third of the world’s population.

Geoffrey Parker, a professor of history at Ohio State University, and a fellow of the British Academy, the Spanish-American Academy of Arts and Sciences (Cadiz) and the Royal Academy of History (Madrid), has brought a new perspective to our understanding of economic, social and political upheavals.

According to his publisher, Yale University Press, “Parker’s demonstration of the link between climate change and worldwide catastrophe 350 years ago stands as an extraordinary historical achievement. And the contemporary implications of his study are equally important: are we at all prepared today for the catastrophes that climate change could bring tomorrow?”

From Portugal’s standpoint, the answer must surely be ‘no’. You don’t have to be a merchant of doom to realize that history suggests Portugal could be facing mayhem.

A few Portuguese academics have warned, for example, that in the decades ahead global warming is likely to greatly deplete water resources, perhaps with a devastating impact on tourism, agriculture and other the primary sources of revenue in southern Portugal.

Do such things enter the mindset of today’s decision-makers in Lisbon? Fixated on austerity measures that aren’t working and the possibility of needing a second bailout, most of them can probably think no further ahead than the next visit by Troika assessors in a few weeks’ time.