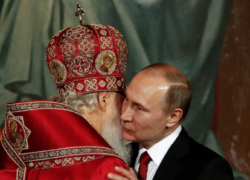 With the approach of Easter, the commemoration of the resurrection of Jesus Christ, a Christian battle is raging within the war in Ukraine.

The battle is between leaders of different factions of the Christian Orthodox Church, the predominant religion in both Ukraine and Russia. It is reminiscent of so many other religious conflicts dating back, from Portugal’s point of view, to the second Crusade to the Holy Land and the Battle of Lisbon in 1147 when the city was captured from Almoravid Muslim occupation. It was pivotal event that allowed Portugal to become an independent Christian kingdom.

Portugal is not innocent of forcibly occupying other countries.  Beginning in the 1400s, this small nation sent occupiers as well as explorers to South America, Africa and Asia. One of their main objectives was to spread Catholicism.  Portugal’s Christian empire survived for more than six centuries and only finally ended after wars in Angola, Mozambique and Guinea-Bissau in 1975. But none of this was nearly as devastating as the present invasion in Ukraine.

It should be noted that although Jesus Christ’s name has often been used to justify military conflicts, the Gospels contain no record of Jesus giving his disciples any explicit teaching on the subject of war.

Unlike Jesus, the leader of the 60 million Orthodox Christians in Russia, Patriarch Kirill, has certainly not been silent on the present war in Ukraine. He has given Russia’s brutal civilian killings and urban destruction his wholehearted blessing. In televised sermons from Moscow’s cathedral he has described the war as “an apocalyptic battle against evil forces that have sought to destroy the God-given unity of Holy Russia.”

Patriarch Kirill and President Putin share a nationalist ideology that they believe justifies the war. Kirill once went so far as to say Putin’s presidency was “a miracle given by God.”

Putin himself is thought to be a devout Christian and he has often appeared with Kirill at Easter services. It will be interesting if they are together this year on Sunday April 24 to bolster the propaganda being regularly aired by the Kremlin’s state-owned media.

In contrast to the Russian claims, the leader of the worldwide Orthodox Church, Bartholomew , the Ecumenical Patriarch of Constantinople who is based in Istanbul, has joined forces with other Orthodox leaders and denounced the invasion as an “atrocious” act that is causing enormous suffering. During a recent visit to Poland, which has welcomed the largest number of refugees fleeing the war, Patriarch Bartholomew said: “It is simply impossible to imagine how much devastation this atrocious invasion has caused for the Ukrainian people and the entire world,” He went on to say during a Warsaw news briefing that solidarity with Ukrainians “is the only thing that can overcome evil and darkness in the world.”

Archbishop Stanisław Gądecki, the head of the Polish Bishops’ Conference, has also deplored Russia’s invasion of Ukraine saying it has resulted in the deaths of “thousands of innocent people, including hundreds of children, elderly people, women and men who had nothing to do with the hostilities. Many of the aggressor’s actions bear the hallmarks of genocide.”  Gądecki has urged Russia’s patriarch to use his influence on President Putin to demand an end to the war and for Russian soldiers to stand down. Kirill has done just the opposite and highly praised the Russia forces.

The Orthodox Church in Ukraine is divided between an independent church based in Kyiv and another one loyal to Kirill in Moscow.

Even though Putin justified his invasion of Ukraine in part as a defence of the Moscow-oriented Orthodox Church, leaders of both the Ukrainian Orthodox factions have condemned the invasion, as has Ukraine’s significant Catholic minority.

Globally, the Orthodox Church is the smallest of the Christian denominations with about 260 million members, 60 million of them in Russia, the rest spread mostly across Ukraine and elsewhere in Eastern Europe, the Caucasus and the Middle East. Protestants have approximately 800 million members worldwide and the Roman Catholics about 1.2 billion.

Despite the current bitter rivalry, as a whole the Orthodox Church claims to be the one true church established by Christ and his apostles. So does the Roman Catholic Church from which people in parts of Russia and Ukraine split and converted to Eastern Orthodox Christianity in 988.

For the first time since the thousand-year- old schism, a Catholic pontiff and an Orthodox patriarch met in 2016. Then last month Pope Francis spoke again with Patriarch Kirill, this time in a video conference. The Pope rejected the Russian’s religious defence of the Ukraine crisis. The Pope insisted that wars are always unjust, because the ones who pay are “the people of God.”

According to a Vatican statement, the Pope continued: “We must unite in the effort to help peace, to help those who suffer, to stop the fire.” He added: “Our hearts cannot help but cry out in front of the children, the women killed, all the victims of the war. War is never the way. The Church must not use the language of politics, but the language of Jesus.”

Many non-religious people across the world who do not believe in God must be wondering if  indeed He really does exist and does not take sides in wars, is it worthwhile for anyone in any religion to pray for peace?

President Putin is a Christian. So is President Biden. Will God be listening to their very different points of view and prayers on Easter Sunday?