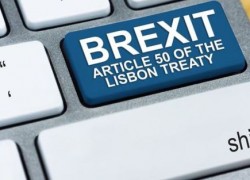 The Chancellor of the Exchequer, Philip Hammond, says no deal would be “a very, very bad outcome for Britain.”

Prime Minister Theresa May keeps telling us that no deal would be better than a bad deal.

Mrs May was equally clear last week in telling more than three million EU citizens, including almost a quarter of a million Portuguese, that her offer of rights to remain in the UK after Brexit was “fair and generous”.

The offer was on the table (if you’ll excuse the pun) at a dinner in Brussels featuring vegetable tart, monkfish and macerated cherries.

According to The Guardian, one of the few British newspapers you can trust these days, Mrs May left the room as EU leaders digested her proposals over coffee and mints.

“Fair and generous” were not the words used afterwards by European leaders. We can only speculate on any off-the-record remarks in foreign languages, but “below expectations”, was EU Council President Donald Tusk’s reported polite riposte.

Representatives of affected EU citizens were much more outspoken. They branded the British prime minister’s offer not only as “vague” but also “pathetic”. Far from being fair and generous, the offer portrayed them as “second-class citizens” and actually worsened doubts and anxieties, they said.

One of many things causing sleepless nights is the fear that Brexit will deny automatic citizenship to about half a million children born or raised in the UK.

Fully a fortnight earlier, the EU had offered a lifetime guarantee on current British expatriate rights, something the British negotiating team in Brussels failed to even acknowledge while warning that their “fair and generous” offer would depend entirely on a reciprocated response by the EU.

The British government finally unveiled details of their offer on Monday this week, which was a year late, and while continuing to use people as “bargaining chips”, complained opposition leader Jeremy Corbyn.

A 15-page document revealed that the three million EU nationals in the UK will have to apply for a special “settled status” identity card if they want to stay.

Among the most noticeable omissions in the document was clarity on when the cut-off date begins (some time between March 2017 and March 2019) and the future rights of dependants of current EU residents in the UK.

The biggest stumbling block of all may be which courts – British or EU – will have jurisdiction in dealing with citizenship disputes.

And yet this whole citizenship issue was supposed to be straightforward and easy, the preliminary bit before the two-year Brexit negotiations get down to the seriously complex stuff about trade.

The Brexit battle seems to have become bogged down before it has really begun.

Meanwhile, the tens of thousands of British expats in Portugal and a million elsewhere in the EU can only look on in befuddlement, and hope that the EU turns out to be fair and generous to them.