Opinion: America is my home because of DACA – by Rodrigo Pimentel 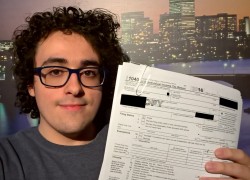 I emigrated to the United States from Portugal at ten months of age, accompanied by my undocumented parents. I took my first steps here, in America. Later, I got my first driver’s license and my first job here. Ours is the nation where I have made lifelong friends, volunteered in my community, and crossed the stage to receive my diploma. America is my home. I have been able to live, work, and study here because of DACA. However, with the impending end of the program, my future — and whether I will be forced to leave the only nation I know — is up in the air.

For the past year, I have been living from court case to court case, as the fate of the Deferred Action for Childhood Arrivals (DACA) program makes its way through the American judicial system. The uncertainty surrounding DACA is a constant source of anxiety and consternation, lingering over all of life’s decisions. Should I apply for a new job to advance my career? Should I go back to college next semester, or instead continue working to cobble together enough in savings to sustain myself in the event DACA comes to an abrupt end?

DACA was implemented in 2012 by the Department of Homeland Security Secretary Janet Napolitano; it allowed immigrants like me to work lawfully and to live free of the fear of deportation. Eligible immigrants must have been 16 or younger at the time of entry into the United States and must have been present since at least June 2007. As soon as I learned of the program, I went through a lengthy application process, paid a fee, and passed a background check, all so that I could contribute fully to my community. DACA is the only option for immigrants like me. Without a U.S. citizen that is an immediate family member (a spouse, for instance), there is no pathway to adjust your status.

The beginning of an emotionally tumultuous roller coaster for young immigrants enrolled in DACA began last September when President Trump and his Attorney General Jeff Sessions announced that the administration would be terminating the program. However, the administration’s efforts to end DACA have been temporarily halted by the courts. Earlier this year, U.S. Citizenship and Immigration Services (USCIS) began accepting renewal requests as mandated by a preliminary national injunction issued in the Northern District of California. This was followed by other orders across the nation on the basis that the administration’s cancellation of the program was unlawful.

Since the injunction, over 130,000 immigrants have sent renewal requests to USCIS, and the agency has approved these applications an average rate of 817 a day, according to the latest dataset as of May 31, 2018. This may not last: a legal showdown heading to the Supreme Court threatens to derail the progress made by DACA recipients.

Most recently, Judge John Bates of the District Court of Washington D.C. ordered that the DACA program must be restored in full on Friday, August 3rd of this year. However, another judge, Andrew Hanen in the Southern District of Texas, is expected to issue an injunction that could halt DACA renewals as early as mid-August. In the coming weeks, the future of the program is in real jeopardy. If the Supreme Court does not stay Judge Hanen’s injunction or decides to stay all injunctions, USCIS may stop accepting renewal requests. An end to the DACA program would affect 500 Portuguese DREAMers (a term referring to young immigrants that would qualify for protection under the DREAM Act).

The case before Judge Hanen differs from other cases brought forth in California, New York, and Washington D.C. Texas Attorney General Ken Paxton is challenging the lawfulness of the DACA program instead of the recession of it, arguing that issuing driver’s licenses to DACA recipients places a burden on the State of Texas. The basis for this argument is a dubious red herring: Texas is free to set the fee associated with processing driver’s licenses without federal approval.

During the past year, DREAMers have been living from court case to court case, while Congress has failed to pass any meaningful legislation that would address our broken immigration system. President Trump has rejected several deals that would protect Dreamers from deportation, in spite of public opinion: nearly 9-in-10 Americans support a pathway to citizenship for Dreamers.

It is time for real leadership in America to address the urgent situation of nearly 800,000 DACA recipients that are about to have the rug pulled from underneath them. The consequences for the American economy is dire, as over 1,400 Dreamers will lose their jobs every business day, should DACA come to an end without a legislative fix in place.

Rodrigo Pimentel is a U.S. immigration activist, political analyst, and editorial writer. He has advocated for Dreamers both with his local congressional delegation and a leader in Washington D.C. Pimentel has written commentary for The Guardian, Al Jazeera, and The Providence Journal.