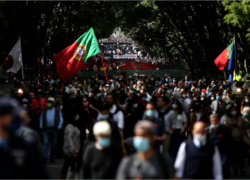 In the run-up to Portugal’s national legislative election, it’s worth remembering that this country is internationally recognized as a stable parliamentary democracy with a multiparty political system and free and fair elections every four years – except the timing of this latest is different.

The Prime Minister holds the most executive power within the parliamentary system, although the President of the Republic can veto legislation or dissolve parliament and trigger an early election.

President Marcelo Rebelo de Sousa did just that towards the end of last year when the incumbent Socialist government under Antonio Costa failed to get their 2022 budget proposals approved. Hence the snap election on January 30, after just two years.

Under a proportional representation arrangement, Portuguese voters select 230 parliamentarians to fill the seats in the Assembly of the Republic.

The Freedom House global research and advocacy organization based in Washington D.C., notes that Portugal has established a strong pattern of peaceful power transfers through regular elections since the return to democracy in the 1970s. In its most recent global index, Freedom House has rated Portugal’s political status very highly. It says that Portuguese voters and politicians are free from undue interference by forces outside the political system. Women and members of different ethnic, religious and other minorities enjoy full political rights and participate in the political system. Women held 38%of the seats in the last parliament. Parties espousing racist, fascist or regionalism values are constitutionally prohibited.

The two autonomous regions of the Azores and Madeira have their own political structures, legislative and administrative powers. While located a long way from the mainland – the Azores archipelago 1,600 km west in the mid-North Atlantic and Madeira 1,000 south of Portugal and 700 km off the west coast of Africa – the rights of their people to self determination have long been recognized and respected by the parliament in Lisbon. The islanders are culturally, politically and economically closely associated with Portugal and the European Union.

Some top politicians as well as judges, bankers, business executives and football club presidents have plagued continental Portugal with corruption scandals that the government in recent years has struggled to cope with. A report issued by the European Commission has highlighted the need for improved anti-corruption efforts. While several laws to enhance accountability and transparency for elected officials were approved in 2019, enforcement and effectiveness remain inadequate.

Other major challenges facing any new government will include the 2022 budget and making the best use of the economic relief funds provided by the European Union. COVID-19 will remain a very difficult issue in the year and perhaps years ahead.

Further pressing matters, such as strike-prone workers in various sectors and the ill-treatment of convicted prisoners, will be high on the agenda for the next government, but it remains to be seen if they can be tackled directly by a majority government or a more complicated coalition.

The two main centrist parties in the last parliament are sure to dominate again. The centre-left Socialists (PS) had 108 seats and the centre-right Social Democrats (PSD) had 79. Opinion polls show the Socialists still favorites to win.The Socialists ruled with support from the far-left from 2015. The centre-right Social Democrats, who are thought of as liberal conservatives, will certainly finish second if not first in the election.

Both the centrist parties and their voters are somewhat concerned about those who are so fed up of the main parties that they will go with the far-right Chega (Enough) party that has whipped up much attention since its founder, Andre Ventura, entered parliament with the party’s single seat in 2019. The far-left, comprising the Left Bloc and the Communists, are trailing, as are The People-Animals-Nature Party and other small groups.

Whatever the result of the latest election, democracy will be faced with very difficult decisions, but freedom and civil liberties will prevail.