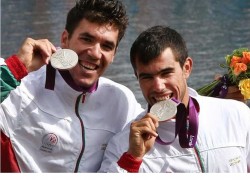 Fernando Pimenta, 22, and Emanuel Silva, 26, of Portugal, won the Olympic Silver Medal for cannoning at the men’s double 1,000-meter K-2.

Rudolf Dombi and Roland Kokeny of Hungary took the gold.  Martin Hollstein and Andreas Ihle of Germany took the bronze. This was the first time Portugal won a medal in canoe sprint.