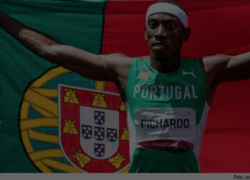 Pedro Pichardo, 28, is the new Olympic Champion in the triple jump. He won the 4th medal in these games, the 1st gold.

The Cuban-born Pichardo athlete recorded 17.98 meters on his third attempt to clinch his first Olympic title. He previously won silver medals at the 2013 and 2015 world championships while representing Cuba.

Pichardo beat Chinese Yaming Zhu with 17.57 and Fabrice Zango, from Burkina Faso, with 17.47, who won the silver and bronze medals, respectively.

Born in Santiago de Cuba, Pichardo won the contest with a jump of 17.98 meters, winning the first Gold Medal for Portugal in Tokyo 2020, after Patrícia Mamona’s Silver in the women’s triple jump; the Bronze of judoka Jorge Fonseca (-100 kg); and of canoeist Fernando Pimenta (K1 1.000).

The President of the Republic, Marcelo Rebelo de Sousa, immediately congratulated the Benfica athlete for winning the Gold Medal for Portugal, “on behalf of Portugal and the Portuguese.”

“In what is already Portugal’s best participation in the Games of the Modern Era, Pedro Pichardo achieved the glory of Olympic gold, the fifth of these medals in the history of Portugal,” says a message published on the official website of the Presidency of the Republic.

Prime Minister António Costa stated that the athlete “flew to gold” in the final of the triple jump of the Tokyo 2020 Olympic Games, noting that it is a result that “fills with emotion and joy”.

The President of the Assembly of the Republic, Ferro Rodrigues, also congratulated the athlete considering that the Pichardo “honored the country that welcomed him and made his own.”

Jorge Pichardo, father and coach of Pedro Pichardo, remarked that his son “has still a lot to conquer for the country”.

Pedro Pichardo’s first relevant international triumph took place in the city of Barcelona at the 2012 Junior World Championship. In that competition he recorded a 16.79 m mark.

In 2013, he started his career in the senior category, achieving first place in the Diamond League in the meeting in Lausanne with a mark of 17.58 m.

On July 5th, he was already representing Portugal at the meeting in Lausanne, taking second place with a mark of 17.61 m.

On March 7, 2021, in Torun, Poland, Pichardo won the European title on an indoor track, with a large advantage over all the competition. In qualifying he was the only athlete to reach a mark over 17 meters (17.03 meters), reaching 17.30 meters in the final.