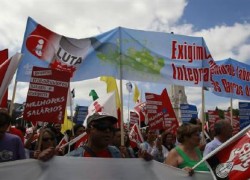 The Portuguese joined the call for a global day of action Saturday with protests planed for Lisbon, Porto, Braga, Coimbra, Évora, and Faro on the mainland. Protests were also scheduled for Funchal (Madeira) and Angra do Heorismo (Azores).

It was estimated that 50,000 people, of all ages, marched Saturday peacefully through the streets of Lisbon to parliament and that 20,000 marched in Porto. In Lisbon, at the end of the day, demonstrators clashed with Police. Two people were arrested.

Protesters were demonstrating against the austerity programs being implemented under the terms of the recent loan bailout agreed by Portugal with the European Union and the International Monetary Found. Protesters also called for more demonstrations, a general strike, and a change of course in the political process that led to the present crisis.

“We want a participatory democracy, where people can actively and effectively be involved in the decisions. A democracy in which the exercise of public office is based on integrity and protection of the interest of the common welfare,” said a manifesto from organizers online.

Thursday, Prime Minister Passos Coelho had announced a new list of austerity measures aimed at cutting the government budget for 2012. He said the measures were needed to face what he described as a “national emergency”.

The Portuguese protests were inspired Saturday by the “Occupy Wall Street” movement in the United States and the “Indignants” in Spain, targeting 951 cities in 82 countries across the planet in Asia, Europe, Africa and the Americas in demonstrations against transnational financial institutions, global capitalist and asking for social equality and structural social changes.