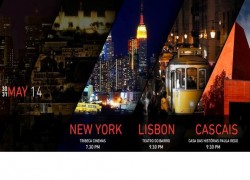 The New York based Arte Institute is presenting the 4th Edition of NY Portuguese Short Film Festival (NYPSFF) to be held on May 30 and 31 in New York City and simultaneously in the Portuguese cities of Lisbon and Cascais.

Selected by a judging panel, the films are directed by Portuguese filmmakers and were produced in Portugal and abroad, offering a unique perspective of the Portuguese culture to national and international audiences.

The Arte Institute is a non-profit organization that promotes the Portuguese art and culture and offers a creative environment for Portuguese artists in the areas of visual arts, literature, music, dance and film. The goal is to foster inter-cultural innovative dialogues between the New York artistic community and Portuguese artists.

For information, venues, tickets and updates log on to Arte Institute here.

“To Dust” (Pó) by Afonso Pimentel

“Any Other Man” (Outro Homem Qualquer) by Luís Soares

“No Mistakes” by Vasco Mendes

“As The Days Went By” by Filipa Ruiz

“The Third Attempt” by Nuno Serrão