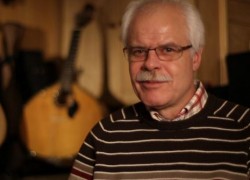 Nuno Cristo is a multi-talented musical instrument maker, composer, singer, ethnomusicologist, and performer from Portugal living in Toronto, Canada, where he moved in 1985. His deeply timbered and soulful voice in Campos de Portugal sings a joyous pastoral anthem influenced by the South American Charango music he heard played by Andean groups in Portugal.

Inspired by the countryside and the optimistic agrarian reform that followed Portugal’s Carnation Revolution, Campos is one of the delightful selections on his ‘Travels in Lusomania’ disc. A pan flute calls, a horse neighs, bells jangle, and the traditional adufe frame-drum sets a beat for the soaring soprano saxophone’s melodic line as it glides over a sun-drenched rural landscape.

The journey to Lusolands with Nuno Cristo emerges from Portugal’s heartland and adventures far beyond in a listening experience that expands notions of both geography and time periods.

“I grew up in Mozambique where my parents were teachers and lived there until I was 13. There was lots of music in the house, all the Portuguese stuff that was forbidden during the dictatorship, songs from Sérgio Godinho, Zeca Afonso, and Zé Mário Branco. Zeca Afonso was able to connect with rural traditions and relate to rhythms from Angola.”

All these influences, in particular colonial Africa, were significant in offering Cristo an uninhibited and varied musical background that would later allow him to explore and create freely in his own compositions and arrangements as well as to construct the instruments capable of creating the sounds he wanted to hear.

“When I was young we had some African instruments at home that I fooled around with, but I had no training. My first instrument was a Melódica. I didn’t really take any lessons until 1977, after I was back in Portugal. I listened to Neil Young and all the music that was happening at the time.” Life in post-

I asked the nightingale
Who taught you to sing
It was country folk, he told me
When they were out sowing

Sing, sing, little bird
Never stop singing
That these folk don’t tire
When they are working

colonial Portugal was in a period of chaotic transition. Cristo studied psychology and worked briefly for a family publishing business, but ultimately decided to pursue music. He wanted to play instruments that were unavailable in stores so he had to make them. “I always loved the bagpipes, and I made one with the help of a wood turner. Of course, it didn’t work very well and finally I found one in the region of Trás-os-Montes that I learned to play.”

A year later, Cristo was playing bagpipes professionally with the theatre group O Bando in a play about the Middle Ages. Once in Canada, Cristo would later adroitly mix traditional Portuguese sounds and styles with African and other world musics in his own compositions.

“I wanted to develop the technique of playing the music. That’s what really provoked me to make instruments.” In the basement of his home in Toronto’s Little Portugal, one room serves for playing his collection of string instruments and teaching a group of cavaquinho players. 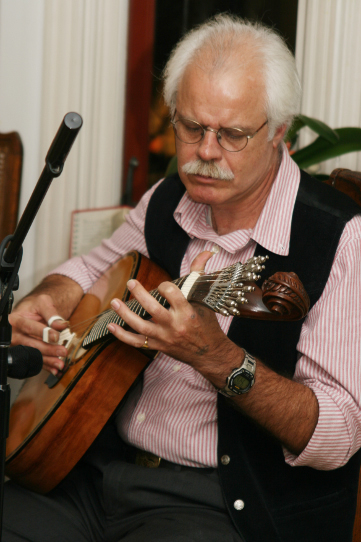 The other room is a tiny workshop where he builds instruments using the exotic woods that are stacked on a shelf. Cristo studied instrument making for two years at the Ontario College of Art.

He handles a fret board currently under construction and exhibits one of the cavaquinho’s sold at Saudade, a Portuguese products store on Dundas Street a few blocks from his home.

He has also made several of the round-bodied Portuguese guitars played in Fado music, a variety of mbiras, the thumb piano from Zimbabwe, and a Valikora a hybrid version of an instrument from Madagascar. “I spent most of my life learning about musical instruments, how they’re built and can be played. As an instrument maker, I can get inside an instrument to understand its every nuance and discover new ways to produce sound. This is the foundation of my work as a composer and musician.”

Although Nuno Cristo’s musical vision draws from many musical influences, most of his globetrotting takes place close to home. “Toronto is an interesting place to live because you can meet people from all over the world, play music with them, learn about their cultures.” He formed a group called Rovambira to play mbira music from Zimbabwe and explore the similarities between that music and Portuguese Fado. It is fascinating to hear the traditional Portuguese guitar and the African mbira form duets on pieces such as fado batido, minha chuinga, and chakwi from his first disc ‘minha terra bansambira’.

On a homemade single reed bagpipe he evokes an exotic snake charmer’s tune in jota, the traditional Iberian dance. The full recording of ‘minha terra bansambira’ is the result of several years of work with his ensemble Alvorado where Chinese flutes join with frog sounds, bagpipes, crickets, and cavaquinhos to explore a delightfully varied and hybrid music. Cristo visits areas of traditional African and Portuguese music with a singular ease and liberty. He is both at home and in far-away places, a musical artist weaving a contemporary folk vision with finesse and soul.

Nuno Cristo’s second disc, Travels in Lusomania, offers the listener exactly what the title promises, a kaleidoscope of imaginative musical journeys through Portuguese-speaking lands. Each song is a port of entry to an enchanting, multi-faceted, and surprising world. His musical project is imaginative and whimsical rather than world-music reporting, an extravagant voyage where tradition and invention mingle freely in mutual inspiration. The results are beautiful.

Cristo’s gentle tenor voice, solo or paired with female voices, sings sweet, somber, and wistful tunes such as senhora dos remédios with resonance and balanced dramatic effect. The original approaches to each of the 11 tunes avoid the clichés one might encounter when combining traditional sources and exotic instruments from different countries. We hear bagpipes, African mbira (thumb piano), seashells, bone rattles, goats bleating, the traditional adufe drum, bird sounds, horse whinnies, and a delightful soprano saxophone that glides playfully through the melodies. Is this Portuguese music? Wonderfully so! Cristo twists, revisits, and embellishes the tunes he has collected from the rural back roads of Portugal, as well others such as the traditional Azorean Terra de Bravo that he reshapes into a danceable upbeat piece that resembles a coladeira from Cabo Verde.

Nuno Cristo’s passion to explore the origins and evolutions of music and the instruments that create it has led him recently to complete a Master’s degree in ethnomusicology at York University. His thesis discussed the history and transformation of the Portuguese guitar associated with Fado music. Currently he is writing a paper on the cavaquinho in the Azores and would like to do a doctoral thesis on the commercialization of the ukulele as it moved across the world. He has written about the influence of Indian music on Portuguese music and the evolution of the banjo from its likely origin in Africa, passing through Europe, and on to the mountain music of Appalachia.

From composing, singing, and playing a wide variety of music to handcrafting fine instruments and academic research, all of Nuno Cristo’s work bear’s the mark of a meticulous and curious craftsman in constant pursuit of answers to his many questions. His world is more of a busy workshop than an ethno-musical museum. Essential to his vision is the quest to discover how this music has passed through many “Lusolands” and can be continually reformed to make it new.

His impulse is always to make a bridge to other cultures, not only in the Portuguese community. Although he has performed with Canadian pop star Nelly Furtado, Nuno Cristo is a quiet and discreet man. If you want to hear him play in Toronto you have to keep your ears open. As well as with others, he performs with his ensemble Anima Fado in a variety of events and venues around Toronto.

(*) is a free-lance writer with a background in literature and the performing arts, in particular contemporary music. He lives in Montreal and contributes regularly to contemporary arts and literary reviews. His work has been published in Europe and in North America, including Canada’s Journey Prize anthology and a winner of a Fiddlehead Fiction Prize. He is a frequent collaborator for Musicworks magazine in Toronto.