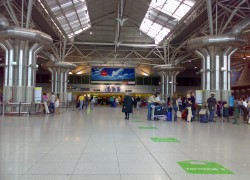 Portugal’s dire economic and financial plight is spurring a new wave of emigration, including an older stratum of people and new destinations, a senior government official said Tuesday.

“We know, namely through the increase of administrative movement through our consulates and through the opening of new (bank) accounts, that there’s a very large increase” in emigration, State Secretary for Communities José Cesário told Lusa.

He said, however, that the government had no detailed figures yet for a variety of reasons, including the fact that Portuguese emigrants could now move freely through the European Union’s Schengen zone.

A “big difference” over Portuguese emigration a decade or so ago, he added, was that today many people aged “40 or 50” had departed or were considering departure, many times “with the whole family in tow.”

Another difference, he said, was that today’s emigrants were often “qualified,” holding university degrees.

Cesário said that, as in the past, France and Switzerland were major destinations, but that oil-rich Angola was now also attracting growing numbers.

In recent years, the Portuguese community in Lisbon’s former African colony has risen rapidly to more than 100,000.

The official said the new emigrants were largely finding jobs abroad in the traditional sectors of hotels, construction and cleaning.

Despite the lack of official figures, the Labor and Training Institute (IEFP)

told Lusa that its registry of candidates for emigration had more than doubled since November 2008 to more than 46,000 this month.