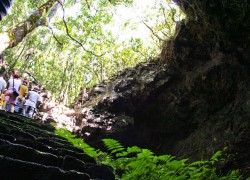 According to Nuno Ribeiro, president of the Portuguese Association of Archeological Research (APIA), additional archeological findings currently under investigation may help to prove human presence in the Azores preceded the Portuguese occupation of the islands in the fifteenth century.

In a statement to the press Monday, Ribeiro said that traces of Sunni inscriptions were discovered on Terceira island in addition to ancient rock carvings found on Terceira and São Miguel islands.

Ribeiro stated that, although such archeological findings have been reported on most of the nine Azorean islands, so far “there are more doubts that certainty.”

Early in March, Nuno Ribeiro revealed that dozens of pre-Christian burial sites were found on the islands of Terceira and Corvo. The old monuments are believed to be over 2000 years old. Similar findings were now reported on the islands of Santa Maria and Flores.

Ribeiro reported the findings after an outing he made in August 2010. Acording to him, the monuments have parallels in the Mediterranean world, namely in the Greek and Carthaginian cultures, where they were used for burials.

Ribeiro also reported that a research grant proposal was submitted to the office of Cultural Affairs of the Regional Government of the Azores whose objective is to establish funding to proceed with research work to determine the origin of the APIA findings.

Researchers are meeting in a conference underway, on Wednesday and Saturday, in Santa Maria and Terceira respectively, to debate the APIA findings.