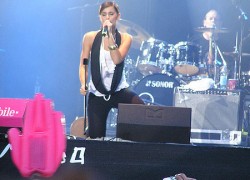 Portuguese-Canadian singer Nelly Furtado, of Azorean descent, was the first to set the example by announcing she is giving away US$1 million she received from the Libyan leader Muammar Gaddafi to perform in 2007 in Italy for his family.

Rapper 50 Cent was the last to joined Nelly Furtado, together with pop stars Beyonce, Usher, and Mariah Carey, artists who have donated money they received from Gaddafi to benefit those affected by the turmoil in Libya.

Expressing her regret, Furtado is using Twitter to discuss with fans plans for the money. “In 2007, I received 1 million$ from the Qaddafi clan to perform a 45 min. Show for guests at a hotel in Italy,” she wrote on Twitter, “I am going to donate the $.”