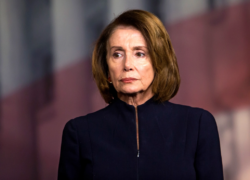 The President of the United States House of Representatives, Nancy Pelosi, is in Lisbon today to speak at the plenary meeting of the 67th annual session of the North Atlantic Treaty Organization (NATO) Parliamentary Assembly, where she received the “Women for Peace and Security Award” bestowed for the first time by the Assembly.

The award was within the scope of the adoption of Resolution 1325 of the United Nations Security Council on “Women, Peace and Security.”

In her remarks, Nancy Pelosi considered that “women are champions in the fight against corruption,” which is equivalent to “strengthening democracy.”

“Fighting corruption is strengthening democracy wherever it may exist,” said Pelosi, underlining that “there is no security until corruption ends.”

Stressing that “NATO is not just a security alliance, but “an alliance of values” ​​she warned of the danger of autocratic regimes that “challenge democracy “as well as corruption that often accompanies these regimens.

The president of US House of Representatives also referred to the situation in Afghanistan, specifically that of women by remarking that “it is not just about women” but also about what it means for Afghanistan and the world security.

“Because we genuinely believe that when women succeed, America succeeds, and every other country succeeds and we all succeed,” she said.

In his speech, Gerald Connolly, the Parliamentary Assembly of NATO, highlighted the “extraordinary contributions” of Nancy Pelosi “to the equal participation of women and men in the field of peace and security and in the protection of women in complex situations,” emphasizing the commitment of the Assembly “to implement and promote the ‘Women, Peace and Security’ agenda.”

Nancy Pelosi, the speaker of the US House of Representatives, met Pope Francis in Rome on Saturday. A Catholic, Pelosi has come under criticism from some bishops in the US for her support for abortion rights.