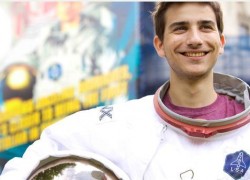 Jocelino Rodrigues, 19, is one of the top four UK finalists who will compete December 1 for astronaut training in the AXE Apollo Space competition at the NASA Kennedy Space Center, Florida, USA.

Born in Porto, Portugal, Rodrigues is a 2nd year Aerospace Engineering student at the University of Bristol, UK. He will spend the next weeks in the Lynx Global Space Camp, in Florida, for the final tests and additional training.

Along with 21 successful candidates, from 77 countries, one of the four UK finalists will experience Earth from outer space in 2014. They will break the sound barrier at zero gravity. Rodrigues will be representing the United Kingdom and Portugal at the competition.

Rodrigues told the British press: “I’m very excited to be spending a week at NASA for astronaut training while competing for the chance of going into space. Flying in a fighter jet, going on a zero-G flight and trying out the centrifuge are some of the tests I’ll be undertaking that week. It will truly be a unique experience and I can’t wait. I’m focused on giving it my best and enjoying the experience.”

Rodrigues has beaten off 87,000 entrants in the worldwide competition promoted by brand name Lynx. The inaugural space flight will be monitored by the internacional Space Expedition Corporation (SXC).

Lynx launched the global competition in January, 2013, with the help of famous astronaut Buzz Aldrin, who was the Lunar Module Pilot in the Apollo 11 mission which achieved man’s first lunar landing in 1969.