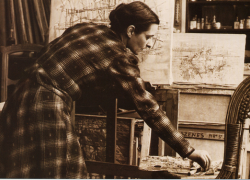 Portuguese expressionist painter, Maria Helena Vieira da Silva, is among 10 famous people who had a crater on planet Mercury named after them by the International Astronomical Union (IAU), the global authority for all planetary and satellite nomenclature.

Their names have joined 114 other named craters since NASA’s Messenger Spacecraft first flew past Mercury in 2008. The names were proposed by the science team for NASA’s Messenger spacecraft.

Born in Portugal in 1908, Vieira da Silva died in Paris, France, in 1992, where she lived since 1928 and became a French citizen in 1956. Although she is regarded as one of the greatest Portugal’s contemporary artist, she has also been recognized among the greatest 20th century French painters, associated with the School of Paris.

Beginning at age 11, she learned painting and drawing at the Art Academy of Lisbon, studied painting with Fernand Léger and Charles Dufresne, sculpture with Antoine Bourdelle, and engraving with Stanley Hayter. She also learned to work in textiles and ceramics.

Her paintings are in important museum collections throughout the world, including the Museum of Modern Art in Paris, the Tate Gallery in London, the Stedelijk in Amsterdam, and the Solomon R. Guggenheim Museum in New York. In 1961, she won the painting prize at the prestigious Sao Paulo Bienal in Brazil.  In 1966, she was the first woman awarded the Legion of Honor by the French Government and France’s National Arts Prize and was named Knight of the Légion d’Honneur in 1979.

All of the craters on Mercury are named after “deceased artists, musicians, painters, and authors who have made outstanding or fundamental contributions to their field and have been recognized as art historically significant figures for more than 50 years”.

“The Messenger team is delighted that the IAU has named an additional 10 impact craters on Mercury,” said Messenger Principal Investigator Sean Solomon.

“We are particularly pleased that eight of the 10 individuals honored made all or many of their artistic contributions in the Twentieth Century, the same century in which the Messenger mission was conceived, proposed, and approved for flight. Imagine,” he said.

The IAU has been arbitrating cosmic names since 1919 and it has strict guidelines for different celestial bodies and planetary features. With the ten new craters labeled, there are now a total of 124 craters named since January 2008.

The newly named craters are :

Calder, for Alexander Calder (1898-1976), an American sculptor best known as the originator of the mobile, a type of kinetic sculpture made with delicately balanced or suspended components that move in response to motor power or air currents.

Capote, for Truman Capote (1924-1984), an American author whose short stories, novels, plays, and nonfiction include the novella Breakfast at Tiffany’s and the true-crime novel In Cold Blood.

Caruso, for Enrico Caruso (1873-1921), an Italian tenor who sang to great acclaim at the major opera houses of Europe and the Americas and appeared in a wide variety of roles from the Italian and French repertoires that ranged from the lyric to the dramatic.

Ensor, for James Sidney Ensor (1860-1949), a Belgian painter and printmaker, considered an important influence on expressionism and surrealism.

Lennon, for John Winston Ono Lennon (1940-1980), an English songwriter, musician, and singer who rose to worldwide fame as a founding member of the Beatles, the most commercially successful and critically acclaimed band in the history of popular music.

Giambologna, for Jean Boulogne Giambologna (1529-1608), a Dutch sculptor known for his marble and bronze statuary in a late Renaissance or Mannerist style.

Remarque, for Erich Maria Remarque (1898-1970), a German author best known for his novel All Quiet on the Western Front, which depicted the horrors of war from the viewpoint of young German soldiers.