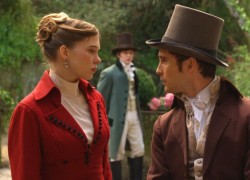 Currently chaired by film critic Brian Johnson of the prestigious magazine “Maclean,” the Toronto Film Critics Association Awards are regarded as an important predictor for the Golden Globes and the Oscars season.

“Mysteries of Lisbon” was also awarded Best Foreign Film of 2011 by the London Critics Circle. The awards ceremony will take place January 19.

Produced by Portuguese film producer Paulo Branco, “Mysteries of Lisbon” was the winner in the United States of the 2011 Satellite Award for Best Foreign Film by the International Press Academy (IPA) alongside “The Descendants” winner of the Best Motion Picture and Adapted Screenplay Awards.

At the IPA awards ceremony, held Monday,  Chile-born director Raul Ruiz was distinguished posthumously with the IPA Special Award for his lifelong film directing career. Raul Ruiz, who died on August 19, 2011, shares the honor with Walt Disney (1940), Jean-Luc Godard (1994) and Jacques Demy (2001) among others.

“Mysteries of Lisbon” is an epic drama set in Portugal around the turn of the 20th century, spanning across Europe (Portugal, France, Italy) and ending in Brazil. Originally adapted for a TV series, from a novel by Portuguese writer Camilo Castelo Branco (1825-1890), it was later re-adapted for the big screen.

“Mysteries of Lisbon”  has premiered in the United States in August 2011 and has been distributed nationwide by Music Box Films. For locations and playdates check Music Box Films here >>