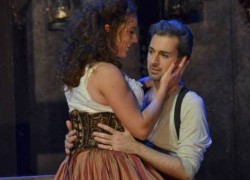 Ribeiro, who made his professional debut as Don Ottavio at the Michigan Opera House, in Detroit, is taking stages by storm all over Europe and North America with his powerfully expressive voice.

Credits include Alfredo (La traviata) and the title role in Roberto Devereux at the Minnesota Opera, Corrado (Il corsaro) at the Asociación Bilbaína de Amigos de la Ópera, Chevalier des Grieux (Manon) at Theater St. Gallen in Switzerland, Icilio (Virginia) at the Wexford Festival Opera, Don José (Carmen) at the Klosterneuburg Opera Festival in Austria, Ismaele (Nabucco) at Teatro Regio di Parma and at Theater Wiesbaden, Tebaldo (I Capuleti ed i Montecchi) in Dublin, and Cavaradossi (Tosca) at the Belcanto Opera in the United Kingdom. In 2013 he performed Siffelio in Monte Carlo, Manon in Montreal, and Attila in St. Gallen. In 2013/2o14 he is performing Carmen in Dallas, Cavaradossi in Earl and Adriana Lecouvreur in Bilbao and Nice.

Born in Portugal, Bruno Ribeiro, studied at the National Music Conservatory of Lisbon before studying with Maestro George Kok in Pretoria and later with Eamma Renzi in Johannesburg, South Africa.