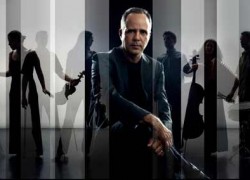 Portuguese composer, Rodrigo Leão, was honored at the 29th Annual ASCAP Film & TV Music Awards with the American Film and Television Award for the soundtrack for the film, The Buttler, directed by Lee Daniels and released in August 2013.

The awards celebration, held June 25 in Los Angeles, honored the composers of top box-office films, the most-performed television scores and the most popular video soundtracks released in 2013.

The film, The Buttler,  was based on the life story of an African-American who worked at the White House for three decades, serving eight presidents, from John F. Kennedy to Ronald Reagan.

Rodrigo Leão, 50, is a founding member of the acclaimed Portuguese former ensemble Madredeus and Sétima Legião band. He also composed the film features of Equador (2008) and O Frágil Som do Meu Motor (2012). Considered one of the most important contemporary Portuguese composers and performers, his work explores a combination of modern-classic compositions with traditional song formats and instrumentation.

The American Society of Composers, Authors and Publishers (ASCAP) is  the leading U.S. Performing Rights Organization representing over 500,000 songwriters, composers and music publishers and the worldwide leader in performance royalties, service and advocacy for songwriters and composers.