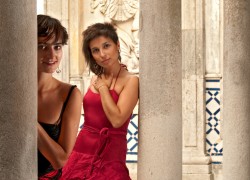 The Ferreira-Mendes Portuguese American Archives at the University of Massachusetts Dartmouth announces a free concert by Doppio Ensemble.

This performance is followed by a second concert to be will be held on Wednesday, November 19, beginning at 8 p.m. at the UMass Lowell Inn & Conference Center, 50 Warren St., Lowell, MA. The event is presented by UMass Lowell’s Saab-Pedroso Center for Portuguese Culture and Research and the university’s International Student and Scholars Office. more information about the performance may contact Natália Melo at Natalia_Melo@uml.edu or 978-934-5199.

With a wide repertoire that ranges from the Baroque period to XXI century compositions, the duo dedicates special attention to Portuguese composers.  Combining tradition and innovation is a distinguishing characteristic of the Doppio Ensemble, which has also influenced the choice and design of the duo’s logo–“Viana´s heart”—symbolizing the double essence and identity of the musicians and the project.

In its constant search for new challenges and eclectic sonorities, the duo frequently enjoys playing jazz, bossa nova and world music. In this concert, they will perform works by Fernando Lopes-Graça, Anne Victorino d’Almeida and Sérgio Azevedo, among others.

Evandra Gonçalves has received awards in Portugal and USA for her performances as a soloist with orchestras in both countries. She was a student of Gerardo Ribeiro (Northwestern University) and Robert Lipsett (University of Southern California) and has attended master classes with Isaac Stern, Augustin Leon Ara, Zakhar Bron, and Almita Vamos, among others.

Ana Queirós, an award winner in national and international competitions, performs regularly in Portugal, Brazil, Germany, England, France, Spain, Italy, and Mozambique. She is a graduate of the Manhattan School of Music, studied with Pedro Burmester in Portugal and obtained her Master of Music in Piano Performance degree as a scholarship student of Solomon Mikovsky. She also studied in Madrid with Galina Egyazarova and attended master classes by Paul Badura-Skoda, Vitaly Margulis, Pierre Reach, Vladimir Viardo, Dimitri Bashkirov, Tania Achot, Laszlo Simon and Charles Spencer, among others.