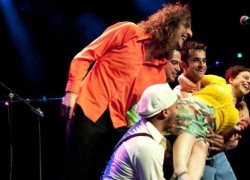 The Portuguese band, OqueStrada, will perform at the annual Nobel Peace Prize Concert, in Oslo, Norway.  A tribute to the year’s laureates, the concert will be held October 11.

The concert, to be staged at the 7,000-capacity Spektrum Arena in the Norwegian capital, the day after the ceremony to award the Nobel Peace Prize, will be broadcast to 100 countries. Other musical performances include Seal and Jennifer Hudson.

This year’s Nobel Peace Prize will be awarded to the European Union  by the Nobel Committee “for its over six decades contribution to the advancement of peace and reconciliation, democracy and human rights in Europe.”

Established in 2012, OqueStrada  created its own eclectic genre the  – Tasca Beat –  which blends Portuguese fado melancholy with Afro-Brazilian beat and Hip Hop.

In 2009, seven years after the first concert, “TascaBeat — O Sonho Português” (“TascaBeat — The Portuguese Dream”) was released in Portugal, to wide acclaim, both from critics and public. It stayed in the Portuguese charts (Top 30) for four months.