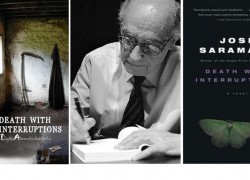 According to the source, “The opera came to life while UC Berkeley historian Thomas Laqueur was involved in a long-term project on death and the dead human body.”

The opera premieres on Thursday and will be on stage on Saturday at the ODC Theatre in San Francisco. The theme is about love, death, and sex, “so it’s the three things that all opera is about,” the composer said.

Titled in in its original Portuguese  ‘As Intermitências da Morte’ the book was first released in 2005 and subsequently translated into English by Margaret Jull Costa in 2008.

Kurt Rohde, Professor of Music Composition and Theory at the University of California at Davis, is one of four composers chosen for a $20,000 award from the American Academy of Arts and Letters. A composer and violinist, he is a recipient of the Rome Prize, the Berlin Prize, a Guggenheim Fellowship, the Lydian String Quartet Commission Prize, and a 2015 Arts and Letters Award in Music from the American Academy of Arts and Letters. He has received commission awards from New Music USA – Commissioning Music/USA, the NEA, and the Barlow, Fromm, Hanson, and Koussevitzky Foundations. Rohde is a graduate of the Peabody Institute at Johns Hopkins University, the Curtis Institute of Music and SUNY Stony Brook.

José Saramago (1922-2010), the recipient of the Nobel Prize for Literature in 1998, was born in the Ribatejo region, mainland Portugal, to a family of farm laborers. He achieved international recognition with his fourth novel Memorial do Convento after it appeared in 1988, in translation, as Baltasar and Blimunda, by Giovanni Pontiero. The Nobel committee praised his “parables sustained by imagination, compassion and irony,” and his “modern skepticism” about official truths.José Saramago wrote 29 books. His last three books, Small Memories, The Elephant’s Journey and Caim were published posthumously. More than 2 million of his books were sold in Portugal alone and many more worldwide where his work has been translated in 25 languages. A member of the Portuguese Communist Party, Saramago was also an atheist and self-described pessimist. At the time of his death, Saramago and his Spanish wife Pilar del Rio, a journalist and translator, lived on Lanzarote island, in the Spanish Canaries.