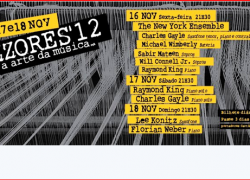 The JAZZORES’12 International Festival opens November 16 in Ponta Delgada, on São Miguel island, Azores. The festival will run jazz concerts through November 16, 17 and 18.

This year the festival will extend to five islands – São Miguel, Santa Maria, Faial, Pico and Graciosa – in an effort to promote cultural decentralization.

The festival will close on November 18 with a performance by international acclaimed USA based jazz duo Lee Konitz (saxophone) and Florian Weber (piano).

Established in 1999, the JAZZORES International Festival has brought to the Azores many prominent national and international jazz performers.

According to the organizers, the objective is to provide younger generations in the Azores with different cultural experiences.