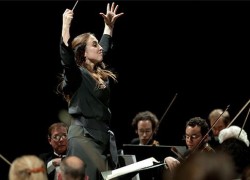 Portuguese conductor Joana Carneiro resigned her position after nine years as music director of the Berkeley Symphony, San Francisco, California. She plans to continue visiting the Bay Area as an emerita music director.

A native of Lisbon, Carneiro began her musical studies as a violist and received her conducting degree from the Academia Nacional Superior de Orquestra in Lisbon, where she studied with Jean-Marc Burfin.

She received her Masters degree in orchestral conducting from Northwestern University as a student of Victor Yampolsky and Mallory Thompson, and pursued doctoral studies at the University of Michigan, where she studied with Kenneth Kiesler.  She has participated in master classes with Gustav Meier, Michael Tilson Thomas, Larry Rachleff, Jean Sebastian Bereau, Roberto Benzi and Pascal Rophe.

Carneiro first gained attention as a finalist in the 2002 Maazel-Vilar Conductor’s Competition at Carnegie Hall. She then served as Assistant Conductor of the Los Angeles Philharmonic (2005-2008) where she worked closely with Esa-Pekka Salonen. She served as assistant conductor to Esa-Pekka Salonen at the Paris Opera’s premiere of Adriana Mater by Kaija Saariaho and led critically-acclaimed pe

In Europe, she has conducted the Norkopping Symphony, Prague Philharmonia and Orchestre de Bretagne, among others. Her Asian appearances have included the Macau Chamber Orchestra and Beijing Orchestra at the International Musica Festival of Macau (China).

She has made recent debuts and returns to major European orchestras such as the BBC Symphony, Royal Stockholm Philharmonic, London Sinfonietta, Helsinki Philharmonic, and English National Opera, adding to a long list of othersorchestras she has worked regularly.

Joana Carneiro, 43, is the 2010 recipient of the Helen M. Thompson Award from the League of American Orchestras to recognize and honor music directors of exceptional promise. In March 2004, she was decorated by the President of the Portuguese Republic, Jorge Sampaio, with the Commendation of the Order of the Infante Dom Henrique.