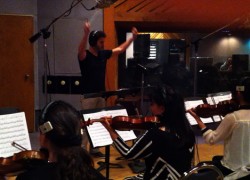 Portuguese screen composer, Nuno Dario, was honored with the Award of Merit by the Global Awards for Original Score.

Dario was awarded for his composition “Earth Home” for a fictional film documentary about climate change.

Born in Lisbon, Portugal, Dario has worked internationally as a composer for film, television, theater, games, animation and commercials.

He has graduated with distinction in Composition from the Lisbon College of Music, and was awarded a PhD scholarship from the Portuguese government to study film composition at Royal Holloway U. of London (UK).

Nuno Dario currently lives in Los Angeles where he attends the Film Scoring Program at the University of California Los Angeles (UCLA).

Recently he was awarded the 2012 BMI/Jerry Goldsmith Scholarship, an annual award presented to a UCLA Extension student in the Entertainment Studies and Performing Arts Certificate in Film Scoring.

The scholarship was named in honor of the late Oscar and Emmy Award winning film and television composer Jerry Goldsmith.

Based in California, the Global Music Awards (GMA) is a prestigious international top-tier music talent competition that honors emergent talented artists from around the world.