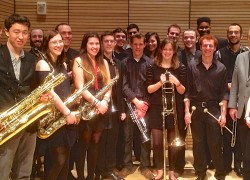 The Brown University Jazz Band, based in Providence, RI, is performing two concerts on São Miguel island, Azores, this week.

Under the direction of Matthew McGarrell, the performances are scheduled to take place in Ribeira Grande, at Teatro Ribeiragrandense, on March 22, and at Coliseu Micaelense, in Ponta Delgada, on March 23.

The old style, eighteen-member big jazz band is comprised of saxophonists, trumpets and trombones, and a “rhythm section” of piano, bass and drums.

It consists of five woodwind players (who play saxophones most of the time), eight brass players (four trumpets and four trombones), a vocalist and a “rhythm section” of piano, bass, drums and guitar.

The band’s repertoire includes pieces by classical composers, such as Duke Ellington, and many modern jazz musicians.

Established in 1764, Brown University is a private research university located in Providence, RI. It is the third oldest institution of higher education in New England and seventh oldest in the United States. Ranked 5th in the country, nearly 6,000 undergraduate students and about 2,000 graduate students are currently enrolled in the university.